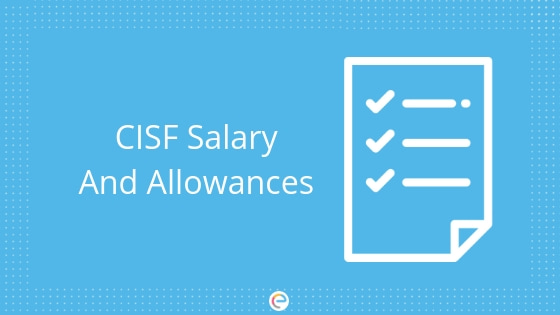 CISF Salary: Central Industrial Security Force (CISF) had released the CISF notification for recruitment of Head Constables (HC). The application process started on 21st January 2019 and the last date to register for the exam was 20th February 2019. A total of 429 vacancies have been announced by the recruitment board for the post of Head Constable in level-4 in the pay matrix.

This is a great opportunity for those seeking government job in the security force. However, this post for Head Constables is temporary and are likely to become permanent. Candidates planning to apply for the exam must have knowledge of CISF Salary for Head Constables. This article will provide the information regarding the CISF Salary 2019. Read on to find out!

As there is a similarity in the syllabus of CISF and NDA, take a mock test from the link below to test your General Ability and also get test feedback after the completion of the test.

Before getting into the CISF Salary details, let us have an overview of the exam which is tabulated below:

The CISF salary structure varies for different posts and each post will be paid according to the categorization made called “Level”. The Pay Matrix Level for Head Constable is Level 4.

Besides the Basic Pay, the CISF salary also includes several allowances. The salary will also vary depending on the location of the posting. Let’s go through the detailed salary structure for the post of Head Constable.

As per the 7th Pay Commission, CISF HC Salary includes the following allowances as well:

After appointment as CISF Head Constable, they shall be entitled to the pension benefits as per the “New Restructured Defined Contributory Pension Scheme” applicable for the new entrants to the Central Government Services with effect from January 1, 2004.

Candidates will be governed under CISF Act and Rule, as well as Central Civil Services Rules applicable to other members of the force and other acts and rules applicable from time to time.

The selection process for CISF Head Constable is as follows:

You are now aware of the CISF Salary Structure for Head Constables. If you are interested to join CISF then here is your opportunity. Get all other relevant information and apply for the post. Then start your CISF preparation.

You also have detailed knowledge of CISF HC selection process which also includes a Written Test as well to check your General Knowledge, General Intelligence, Arithmetic and knowledge of English and Hindi languages. Since the CISF syllabus is almost the same as that of bank job exams, you can take the bank mock test series of Embibe. These test will help you in your CISF HC preparation as well. Embibe wishes you all the best!

We hope this article on CISF Salary helps you. If you have any question, feel free to post your comments below. We will get back to you as soon as possible.