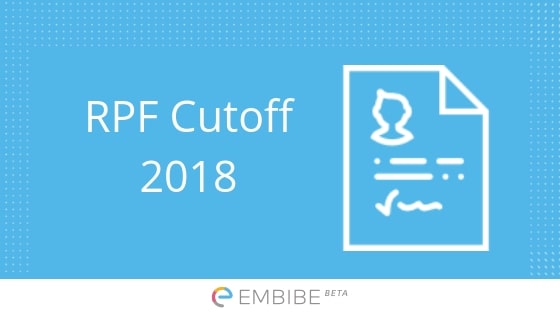 RPF Cutoff 2018-19: RPF 2018-19 is three tier exam that is conducted for the recruitment of Constables and Sub-Inspectors in Railway Police Force (RPF) and Railway Police Special Force (RPSF) in Indian Railways. The three stages of the exam are – (a) Computer Based Test (CBT), (b) 1st Physical Efficiency Test (PET), Physical Measurement Test (PMT) & Document Verification (DV) and (c) 2nd PET, PMT & DV. The 2nd and 3rd stage of the selection procedure are mandatory but are just qualifying in nature and no marks will be awarded for these two stages. Candidates who cleared the RPF cutoff of CBT appeared for the 1st round of PET, PMT & DV. The RPF Cutoff for the CBT is the minimum qualifying marks that candidates must secure in order to be eligible to appear for the PET & PMT round.

RPF has released the RPF CBT Result for SI and Constable posts for all Groups. The RRPF result for 1st PMT, PET & DV too is released for Group E of SI and Constables. Also, RPF cutoff marks 2018-19 for all Groups of Sub-Inspectors, i.e. Group A, B, C, D, E, and F have been declared. In this article, we will give you detailed information about RPF Cut Off. Read on to find out.

Candidates must first be aware of the different types of RPF Cut Off.

There are three types of RPF Cut Off marks as follows:

If a candidate clears all the three cutoff, he/she can appear for the next stage of the recruitment process, i.e. for PET and PMT.

Check out the RPF Cut Off scores 2018-19 for all Groups of SI in the table below. Note that this is the normalized score.

The RPF previous year cutoff for 2015 and 2011 are tabulated below:

The section-wise and overall RPF Cut Off for 2015 are tabulated below:

The RPF official cutoff  for 2011 are as under:

The expected sectional and overall RPF Cutoff 2018 are tabulated below:

The official RPF Cut Off marks for 2018 will be released after the Computer Based Test is conducted in September-October (tentative).

Candidates must remember that clearing the cutoff makes them eligible to appear for the next round of the selection process. It, however, doesn’t guarantee the job. The final merit list will be created based on merit, i.e. the marks you secure in the CBT provided you qualify in the next rounds. So, you must prepare in a way that guarantees a high score.

Find Out Everything About RPF Salary Here

We hope this detailed article on RPF Cutoff helps you. If you have any query, drop a comment below. We will be happy to guide you.