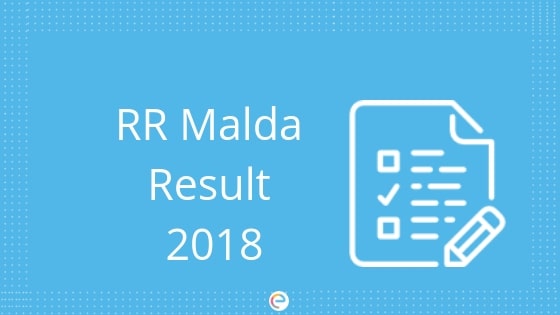 RRB Malda Result 2018: Railway job aspirants who appeared in RRB ALP and RRB Group D exams are eagerly waiting for the results. The Railway Recruitment Board (RRB) releases the result of the respective exams region-wise. There are 21 regions of RRB and each of them has an official website. Candidates will have to log in to their account from the official website of the region they applied for.

The steps mentioned below will assist you in downloading your RRB Malda Result:

RRB Malda Scorecard for ALP and Group D will have the following details mentioned on it:

Check out the vacancies in RRB Malda for ALP and Group D:
RRB Malda ALP Vacancy For ER:

The following factors determine the RRB Malda cutoff for ALP and Group D:

How To Check Your RRB Malda Cut Off?

Follow the steps as under to check the RRB Malda cutoff for the respective posts:

Cut Off marks for RRB ALP First Stage is given below:

Cut Off Score for RRB ALP Second Stage Part A is mentioned below:

Qualifying marks for RRB Group D are given below:

RRB Malda answer key for ALP and Group D has already been released on rrbmalda.gov.in. The conducting body usually releases the answer key soon after the exam gets over. The cause behind releasing the answer key is to keep applicants updated on the transparency in the recruitment process.

Candidates even get a chance to raise objections against the answer key if they find any error. Answer key also lets candidates calculate the marks they are likely to secure in the exam.

RRB Malda Score for ALP as well as Group D can be calculated using this formula:

Candidates can raise objections on the released answer key in the following cases:

Now you have all the necessary information regarding RRB Malda Result. Hope for the best. But do not get disheartened if you cannot make it to the merit list. You will get many such opportunities in the future. So, do not lose hope. Ping us if you need any help, and we will be happy to guide you.

If you face any query regarding RRB Malda Result, do let us know your queries in the comment section below and we will get back to you at the earliest.