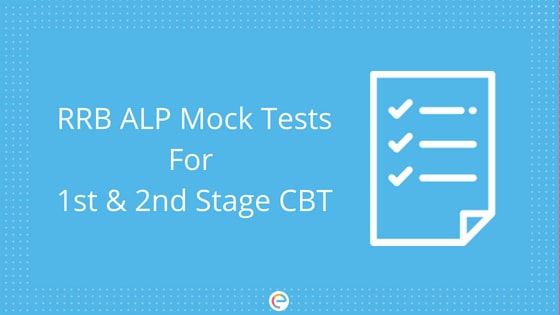 RRB ALP Mock Test Series: The Railway Recruitment Board (RRB) is conducting the RRB ALP exam for recruitment of Assistant Loco Pilots (ALP) and Technicians in Indian Railways. The first stage of the exam is ongoing and after that, candidates who clear the 1st Stage Computer Based Test (CBT) will appear for the 2nd Stage CBT. If you are a RRB ALP aspirant, you must take RRB ALP Mock Test Series.

Without taking RRB ALP Mock Tests, your RRB ALP preparation will be incomplete. Because, you won’t get an idea about where you are standing and whether or not you need to improve, and if yes, which are the areas of improvement. It is, therefore, very important that you take RRB ALP Mock Tests for every stage of your preparation. In this article, you will get detailed information on how to take RRB ALP Mock Test, what are the benefits of taking the tests, and how to develop a proper and smart test-taking strategy. Read on to find out.

Before getting into the details of RRB ALP Mock Test Series, we need to look at the RRB ALP exam pattern. The selection of ALP and Technicians involves the following stages:

The different sections of 1st and 2nd Stage CBT are tabulated below:

As you can see, the various sections of 1st Stage CBT and Part A of the 2nd Stage CBT are almost same. Also, these sections are found in exams of other government jobs, like bank PO and Clerk jobs (except the section for General Science and Basic Science & Engineering). So, taking mock tests for bank exams, especially bank PO exams will be useful for RRB ALP exam as well.

As mentioned above, the different sections, syllabus, and pattern of RRB ALP exam are almost the same as that of bank PO exam. So, you can take the bank PO mock test series during your preparation for RRB ALP exam.

Follow the steps as under to take bank PO mock test series:

Taking RRB ALP Mock Test Series once you have finished the whole syllabus has many benefits. Some of them are tabulated below:

How To Attempt RRB ALP Exam

Your score in any exam depends upon the way you take tests – your overall strategy to take the exam. This means you need to select the questions wisely, not try to attempt every single question as they appear. Otherwise, you will end up spending time on questions which you ultimately do not answer or get wrong. The idea is to maximize your accuracy, minimize negative marking, and score as high as possible.

Attempting the RRB ALP exam in the following manner will help you achieve this goal:

As you take RRB ALP Mock Test Series, try to develop the habit of attempting the paper in the above manner.

Now that you know how to take RRB ALP Mock Test Series and how to develop a smart test-taking strategy, start taking the mock tests on Embibe.

Embibe also provides a detailed analysis of the test with which identifying your conceptual weaknesses and gaps in test-taking strategy become very easy. All you have to do then is work on those aspects and your score will increase from test to test. However, you need to unlock the Advanced Test Analysis for this purpose.

We hope this detailed article on RRB ALP Mock Test helps you. If you have any confusion, feel free to comment below. We will get back to you.