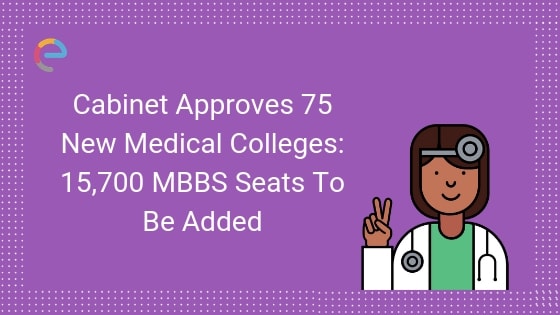 BENGALURU, August 29: The Cabinet Committee on Economic Affairs (CCEA) chaired by the Prime Minister Narendra Modi has given its approval for establishment of 75 new Government Medical Colleges across India. This approval from the Central Government will increase undergraduate MBBS seats by 15,700 which will lead to the total number of undergraduate medical and dental seats in the country to close to one lakh.

As quoted in the press release, “the establishment   of new   medical   colleges would lead to an increase in the availability of qualified health professionals, improve tertiary care in Government sector, utilize existing infrastructure of districts hospitals and promote affordable medical education in the country.”

The Central Government has also sanctioned an expenditure of Rs. 24,375 crores in the 15th Finance Commission for establishment of 75 new Government Medical Colleges with 15,700 new MBBS seats.

As per government in last five years, over 45000 news seats were created in undergraduate and postgraduate medical admissions.

NEET 2020 will have more MBBS Seats

NEET 2020 which is scheduled to be held on May 3 in pen and paper-based mode will have an additional of 15,700 MBBS seats. The admission chances of NEET UG aspirants will be marginally higher due to the approval of more medical colleges and increased in undergraduate seats. With the addition of more seats, NEET 2020 will be conducted for admission to nearly 1 lakh MBBS and BDS seats under 15% All India and 85% State quota seats.

Stay tuned to embibe.com for latest news and updates on NEET 2020