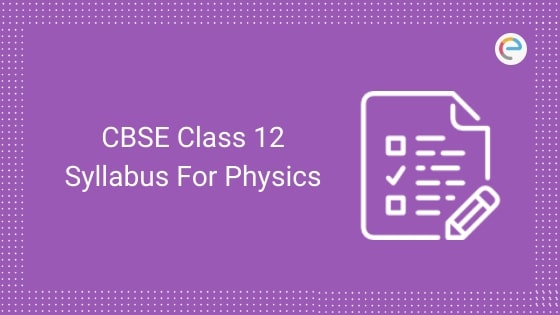 As mentioned above, the CBSE Class 12 Physics Theory exam carries 70 marks and the time duration is three hours.

Let us see which units and chapters are included under CBSE Class 12 syllabus for Physics:

Let us now look into the detailed CBSE Class 12 syllabus for Physics – chapters and concepts under each of these units:

Electric potential, potential difference, electric potential due to a point charge, a dipole and system of charges; equipotential surfaces, electrical potential energy of a system of two point charges and of electric dipole in an electrostatic field. Conductors and insulators, free charges and bound charges inside a conductor. Dielectrics and electric polarisation, capacitors and capacitance, combination of capacitors in series and in parallel, capacitance of a parallel plate capacitor with and without dielectric medium between the plates, energy stored in a capacitor.

Electric current, flow of electric charges in a metallic conductor, drift velocity, mobility and their relation with electric current; Ohm’s law, electrical resistance, V-I characteristics (linear and non-linear), electrical energy and power, electrical resistivity and conductivity, Carbon resistors, colour code for carbon resistors; series and parallel combinations of resistors; temperature dependence of resistance. 1 Internal resistance of a cell, potential difference and emf of a cell, combination of cells in series and in parallel, Kirchhoff’s laws and simple applications, Wheatstone bridge, metre bridge. Potentiometer – principle and its applications to measure potential difference and for comparing EMF of two cells; measurement of internal resistance of a cell.

Ray Optics: Reflection of light, spherical mirrors, mirror formula, refraction of light, total internal reflection and its applications, optical fibers, refraction at spherical surfaces, lenses, thin lens formula, lensmaker’s formula, magnification, power of a lens, combination of thin lenses in contact, refraction of light through a prism. Scattering of the light – blue colour of the sky and reddish appearance of the sun at sunrise and sunset. Optical instruments: Microscopes and astronomical telescopes (reflecting and refracting) and their magnifying powers.

Students have to submit a record at the time of their annual examination which has to include:

The list of experiments included in the CBSE Class 12 syllabus for Physics Practical Section A are as under:

Activities (For The Purpose Of Demonstration Only)

The list of experiments included in the CBSE Class 12 syllabus for Physics Practical Section B are as under:

Activities (For The Purpose Of Demonstration Only)

Embibe’s CBSE study material explains all the chapters and concepts in the CBSE Class 12 syllabus of Physics in details. Also, you can practice CBSE Class 12 Physics questions on Embibe.