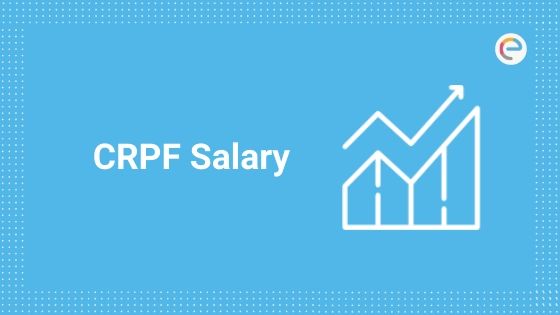 CRPF Salary 2021: Central Reserve Police Force (CRPF) is the largest Central Armed Police Force of India. CRPF conducts various recruitments to recruit capable persons to work in CRPF. There is great competition to secure these jobs to work in the Central Reserve Police Force (CRPF). Working in CRPF will give great respect in society. Apart from getting respect and job security, candidates are also benefited from an attractive CRPF Salary. Along with CRPF Salary, additional benefits/ allowances will be there. Candidates applying for CRPF jobs should have knowledge on CRPF Salary Structure and it is an important part of CRPF recruitment as it allows candidates to apply for the right choice of the post that would be best for them.

CRPF Salary will vary from one person to another person based on their post and position. Candidates can get all the info here on CRPF Salary before & after the revised 7th pay commission. Hence, this article gives you all the necessary details of CRPF Salary 2021 of all posts such as Constable, Head Constable, Inspector, and other posts. Read this article to find out more about it

Candidates can check this page for sarkari naukri latest updates which will help them to know which are the ongoing and upcoming sarkari exam. Based on the sarkari exams information they can check their eligibility related to age and academic qualification before they apply for the various government jobs posts. Moreover, candidates can also check the sarkari result to know their status of qualifying the exam which they have appeared in.

The CRPF Salary Structure Before the 7th Pay Commission for each post is given below:

After the introduction of the 7th Pay Commission, the salary for various government positions is calculated as follows:

The CRPF Salary Structure After the 7th Pay Commission is as under:

The CRPF salary also includes various allowances which are as under:

Candidates who wish to join the CRPF need to clear the following rounds.

Candidates who will be able to qualify the first round based on the merit list can appear for the physical examination and further rounds.

Now you have all the necessary information regarding CRPF Salary. We hope this detailed article helps you. Focus on your CRPF exam preparation now. Be thorough with the CRPF syllabus and finish each and every concept diligently. Solve a sufficient number of CRPF practice questions.

Also, take CRPF mock tests on a regular basis. As the Part A of the Online Test has almost the same syllabus as that of banking exams, you can take bank mock tests to prepare for this section. Embibe provides bank mock test series for free. So, take these tests, identify your mistakes, and work on them to improve your score.

In case you have any doubts regarding CRPF Salary you may ask us via the comment section below. We will get back to you at the earliest.

Stay tuned to embibe.com to get the latest updates on Central Reserve Police Force Salary 2021.