The periodic table is divided as follows: 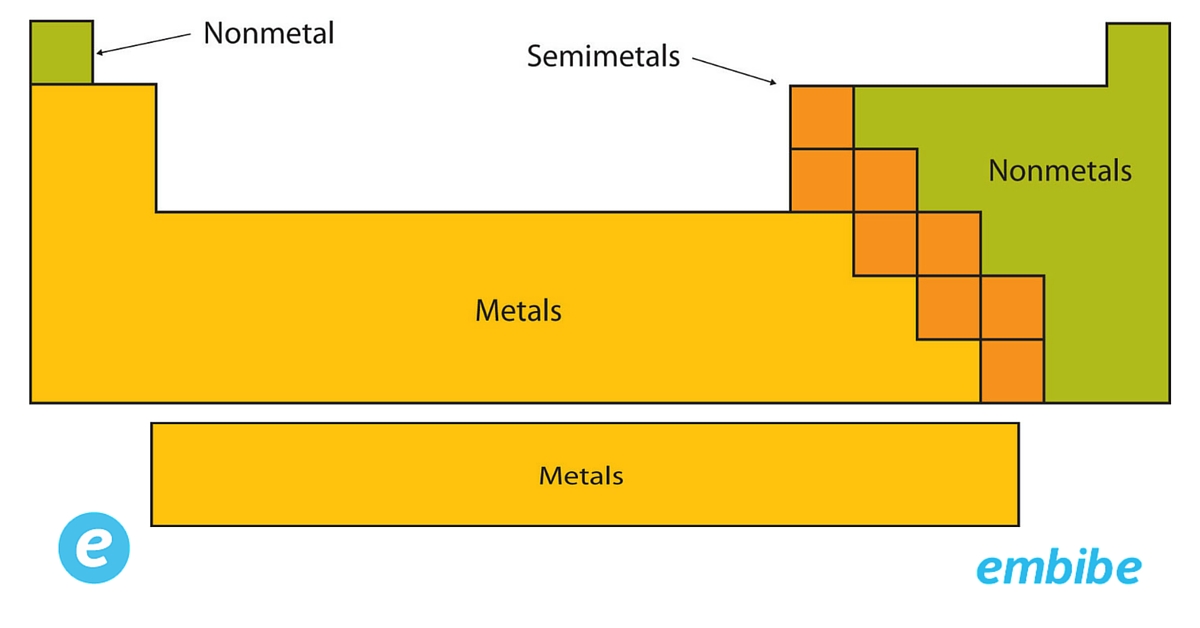 Metals in the periodic table completely occupy groups 1 to 12, while they are also present in other groups. They are good conductors of heat, malleable, ductile and shiny to look at. .Most of the metals have 1 or 2 electrons in the outermost energy level, while transition metals also have incomplete inner orbitals. Metals are classified as Alkali metals, alkali earth metals, transition metals and inner transition metals. Due to different electronic configurations, metals have different properties and hence, may not act in the same manner.

Apart from the metals what remains are mostly nonmetals with a few metalloids. They are poor conductors of heat, non-malleable, non-ductile and not shiny by nature (Except for Iodine).  Non-metals generally have 4 or more electrons in the outermost shell. Due to this, they have a tendency to accept electrons and are thus, electronegative by nature.

Group 7A/17 halogens are reactive nonmetals. They are commonly known as colorful term “halogen” which means “salt-former” and compounds containing halogens are called “salts”.

The elements of group 8A that is the 18th group of the periodic table are noble gasses. They are colorless and unreactive. They are also included in the nonmetals.

They have the properties of both metals and nonmetals, therefore, they are called semimetals and are also called metalloids. In the periodic table, there are metals on the left side and non-metals on the right side and in between them are placed the semimetals. They are similar to metals but are not metals. Eg. Boron, Silicon, Germanium, Arsenic, Antimony, Tellurium and Astatine(sometimes).

Based on their electronic configuration the periodic table is divided as follows: You can identify and categorise elements in the following categories based on the which shell the last electron enters..

Elements with differentiating electron in the s-orbital are categorised as the s-block elements of the periodic table. The elements of group 1A( alkali metals) and 2A( alkaline earth metals) have 1 and 2 electrons respectively in their outermost energy shell. Hence, the groups of IA and IIA are s block elements.

These elements receive their last electron in their p-orbitals and hence they are categorised as the p-block elements. The atoms of these elements are in groups III A, IV A, VA, VI A, VIIA and zero (except helium). The p orbitals extend from 2p to 7p.

Here is a mnemonic to remember the entire periodic table easily.

How useful is it in chemistry?

From the periodic table, you can find the following things for any elements.

Summary of all the trends can be found in the below table:

Well, the periodic table is vast it isn’t easy to learn everything all at once. But the periodic table for sure can make chemistry easy. Chemistry does not only need knowing the concepts it also requires an equal amount of practice. Embibe provides you with practice and tests that will help your score improve by 29% of your previous score.

Take a mini test to find out your strengths and weaknesses for JEE
Main
Free, Forever, For All.