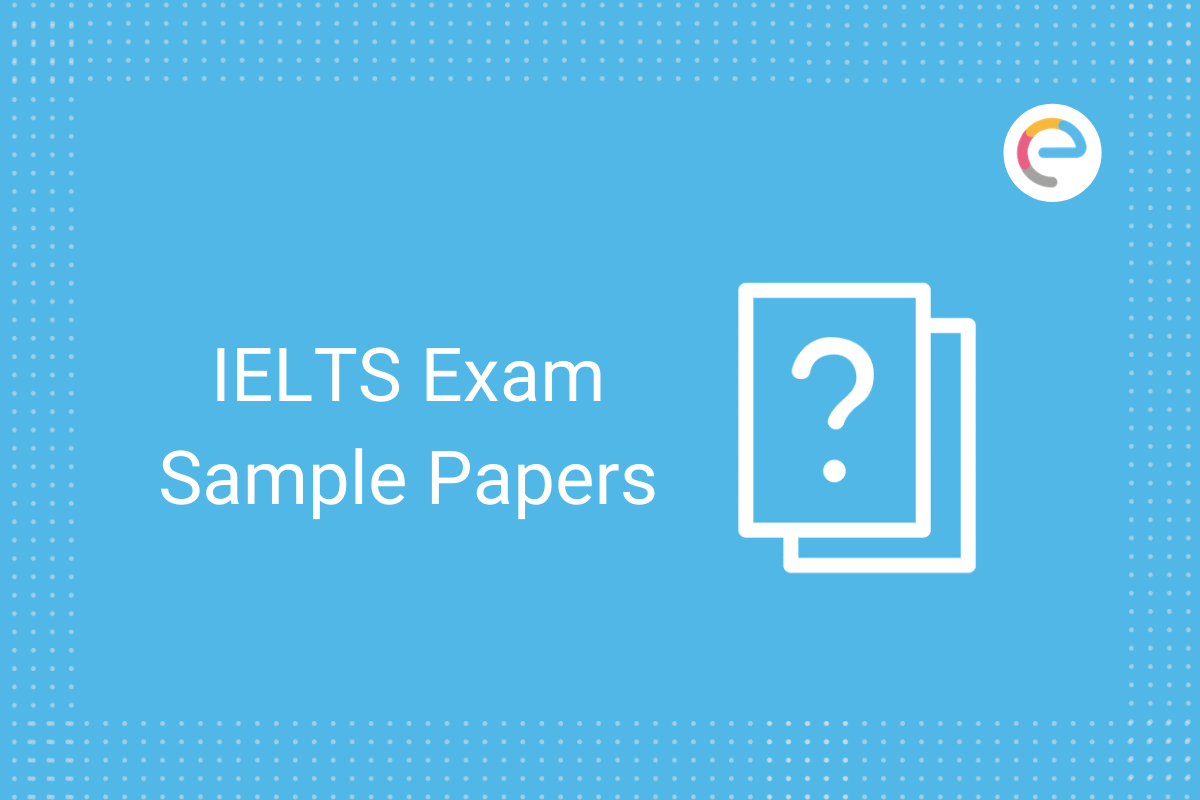 IELTS Sample Paper 2021: Candidates willing to appear for IELTS, need to practise IELTS exam sample paper. To get admission to desired universities of the world or to get placed in a dream multinational company, candidates have to clear IELTS with a good score. In order to score well, candidates need to practise IELTS question paper as much as possible. It will not only provide an idea about the exam but will also help in time management. Get IELTS sample paper pdf below.

In order to practise IELTS exam sample papers, candidate should understand the exam pattern of the exam. IELTS exam will turn out to be difficult if an applicant won’t know the paper pattern well. As per IELTS exam pattern, it tests the candidate’s capability in four different parameters like listening, reading, writing, and speaking.

There are two types of IELTS tests available for candidates. One is IELTS Academic and IELTS General Training. The first one is chosen by candidates for getting admission in dream colleges or universities across the world and the second one is selected by candidates who need to score for a particular organization, etc. All the test takers of IELTS take the same Listening and Speaking tests. What different among the two kinds of tests are the Reading and Writing tests. Candidates are advised to make sure which test they wish to appear for.

By using the practice tests, candidates will be able to:

The listening test is the same for the two kinds of IELTS tests i.e. Academic and General Training test. The listening test consists of four recorded monologues and conversations. The following IELTS Listening sample tasks can be practiced by the candidates:

Recording 1: A conversation between two people set in an everyday social context.

Recording 2: A monologue set in an everyday social context, e.g. a speech about local facilities.

Recording 3: A conversation between up to four people set in an educational or training context, e.g. a university tutor and a student discussing an assignment.

Recording 4: A monologue on an academic subject, e.g. a university lecture.

The Academic Reading Test includes three long texts which range from descriptive and factual to discursive and analytical. The texts are taken from books, journals, magazines and newspapers. They have been selected for a non-specialist audience but are appropriate for people entering university courses or seeking professional registration.

This test includes extracts from books, magazines, newspapers, notices, advertisements, company handbooks and guidelines. These are materials you are likely to encounter on a daily basis in an English-speaking environment.

Task 1 – Candidate will be presented with a graph, table, chart or diagram and asked to describe, summarize or explain the information in your own words. He/she may be asked to describe and explain data, describe the stages of a process, how something works or describe an object or event.

Task 2 – Candidate will be asked to write an essay in response to a point of view, argument or problem. Responses to both tasks must be in a formal style.

Task 1 – Candidate will be given a situation and asked to write a letter requesting information, or explaining the situation. The letter may be personal, semi-formal or formal in style.

Task 2 – Candidate will be asked to write an essay in response to a point of view, argument or problem. The essay can be fairly personal in style

This test will consist of an oral interview between the test taker and the examiner. Candidates, please note that the complete conversation will be recorded.

Part 1 – The examiner will ask general questions about the test taker and a range of familiar topics, such as home, family, work, studies and interests. This part lasts between four and five minutes.

Part 2 – Candidates will be given a card after which asks he/she will be supposed to talk about a particular topic. He/she will have one minute to prepare before speaking for up to two minutes. The examiner will then ask one or two questions on the same topic.

Part 3 – Candidates will be asked further questions about the topic in Part 2. These will give the candidate an opportunity to discuss more abstract ideas and issues. This part of the test lasts between four and five minutes.

How Is IELTS Writing Test Marked?

The writing test will be marked on the basis of candidate’s performance in the areas of ‘task response’, ‘coherence and cohesion’, ‘lexical resource’, and ‘grammatical range and accuracy’. The assessment will be done based on the answers provided by the candidate on the answer sheet.

How Is IELTS Speaking Test Marked?

The speaking test is not that tough if a candidate is well known with spoken English and is fluent. The test is basically like a conversation between two people. During this test, candidates will be made to sit in a private, quiet room with a qualified examiner who will engage you in a conversation. As the conversation with a stranger can be difficult sometimes, the examiner can slow down for you, speed up or even repeat or rephrase a question if the candidate asks. The speaking skills are marked against a number of criteria, including ‘fluency and coherence’, ‘lexical resource’, ‘pronunciation’, ‘grammatical range’ and ‘accuracy’.

How Is IELTS Reading Test Marked?

IELTS reading test will be based on the spoken and reading attributes of the candidate. The candidate will be assessed on the answers he/she selects. The questions will be basically in the form of true/false. Here is the table for candidates to know the Band Score:

How Is IELTS Listening Test Marked?

In this test, candidates will have to answer 40 questions based on the audio clips. The answers will be either right or wrong so the marking scheme will be different from speaking and writing tests.

The overall score of all the tests is the average of the four components i.e. Writing, Reading, Listening and Speaking. The average score will be rounded to the nearest whole or half band. The component scores are weighted equally.

Each of the tests i.e. Writing, Reading, Listening, and Speaking will be marked and the candidate will receive a band score from 0-9. The average of this score will form your overall IELTS band score. The table below rates each band score against an English skill level.

Candidates getting 9 band score are considered to have fully operational command of the language. Their use of English is appropriate, accurate and fluent, and shows complete understanding.

Applicants getting 8 band score are considered to have a fully operational command of the language with only occasional unsystematic inaccuracies and inappropriate usage. They may misunderstand some things in unfamiliar situations. They handle complex and detailed argumentation well.

Candidates getting 7 band score have operational command of the language, though with occasional inaccuracies, inappropriate usage and misunderstandings in some situations. They generally handle complex language well and understand detailed reasoning.

Applicants getting 6 band score have an effective command of the language despite some inaccuracies, inappropriate usage and misunderstandings. They can use and understand fairly complex language, particularly in familiar situations.

Candidates getting 5 band score have partial command of the language and copes with overall meaning in most situations, although they are likely to make many mistakes. They should be able to handle basic communication in their own field.

Applicants getting 4 band score have basic competence is limited to familiar situations. They frequently show problems in understanding and expression. They are not able to use complex language.

Candidate getting 3 band score conveys and understands only general meaning in very familiar situations. There are frequent breakdowns in communication.

Candidates getting 1 band score have no ability to use the language except a few isolated words.

Band score (0): Did not attempt the test

Candidates getting 0 band score did not answer the questions.

Below are the frequently asked questions on IELTS exam sample paper:

Stay tuned to embibe.com  for the latest news and updates on IELTS Exam Sample Paper 2021.