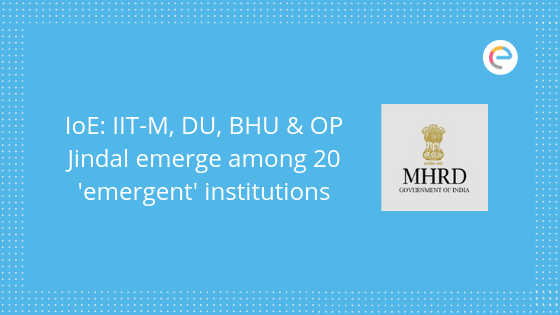 However, another lot of private universities including Azim Premji University, Ashoka University, KREA University, Indian Institute for Human Settlements and the Indian Institute of Public Health were denied the IoE tag. The denial cause for an IoE tag to these private institutions is that they have not been figured in any of the Global University Rankings or National Rankings for that matter.

The exclusion, further created a vacant slot on the list of private universities, Satya Bharati Foundation, telecom major Airtel’s philanthropic arm, could become the second greenfield institution to be given the IoE tag, after Jio Institute, backed by Reliance Foundation.

N.Gopalaswami, former Chief Election Commissioner, who heads the expert panel identifying IoEs, was quoted saying, “We considered two types [of institutions], those who are already ranked well and those which are potential institutions. We might have felt something has potential, but government may feel something else, they may have felt that if an institution is not ranked at all, it cannot be considered. It is entirely justified.”

The expert committee, last year in July, had recommended 11 institutions for the IoE tag. The MHRD had then accepted six recommendations with IITs Delhi and Bombay, IISc Bangalore, BITS Pilani, Manipal University, and the yet-to-open Jio University. In December, the expert committee recommended 19 more names and asked the UGC to consider all 30 for the tag.

However, following the MHRD decision to limit the scheme to the original 20 institutions — 10 private and 10 public — the UGC was forced to prune the list. Further, the list was prepared considering the QS India 2019 Rankings as well as NIRF Rankings. The institutions which didn’t come up in any of these rankings were excluded from the UGC IoE list.

The five public universities which could not make the cut are Tezpur University, Panjab University, Andhra University, Savitribai Phule Pune University and Aligarh Muslim University. While the first three didn’t figure in any of the rankings, the other two ranked, however, lower than the Banaras Hindu University. This is where BHU emerged to be tagged with an IoE status.

Further, the Anna University and Jadavpur University have been given a conditional IoE tag, being State Universities, where the final status will be given only after the State Governments of Tamil Nadu and West Bengal would issue an official communication allocating their 50% of fund shares.

Stay tuned to embibe.com for latest news and updates on IoE