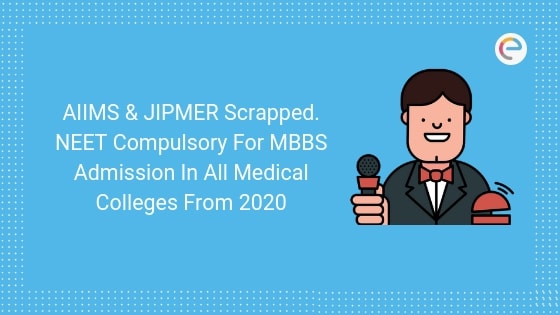 Candidates will now have to only prepare for NEET, through which one can participate in the medical counselling for all the medical colleges. As the AIIMS and JIPMER exams are now scrapped, the difficulty level of NEET 2020 can also be expected to raise. However, no official notice is there in this regard.

A common medical counselling will now be conducted which is likely to be under the National Medical Commission Act, which will come to force from next academic year (2020).

Besides that, a common final year MBBS exam which will be applicable to all institutes including those of national importance like AIIMS will also be implemented. However, there is a three-year window before NEXT (National Exit Test) becomes operational and the modalities of the exam would be finalised by the NMC.

According to the NMC Act, the NEXT results would be the base for admission to PG courses and to obtain a licence to practice. It would also act as a screening test for foreign medical graduates. Regulations for operationalising the NEXT would be made in due course keeping in mind the importance of both theoretical as well as clinical skill sets required at the level of UG after consultation with all stakeholders.

Lastly, as NEET is now the only exam for medical admission one can expect changes in NEET 2020. However, no official confirmation yet. So, stay tuned with Embibe and subscribe for push notifications to get the latest news and updates.

Stay Tuned on embibe.com for more news and updates on NEET 2020.