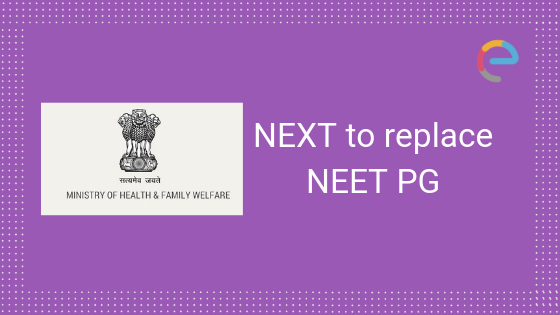 BENGALURU, JULY 16: In what it may bring relief and dismay, both to different MBBS graduates, the Health Ministry has proposed to scrap NEET PG while replacing the post graduate medical entrance examination with a National Exit Test (NEXT). The Health Ministry has made the proposal to do away with NEET PG in a revised draft national Medical Commission (NMC) Bill.

The revised draft NMC Bill will be sent to the Cabinet soon, wherein the changes including NEET PG scrap proposal have been made on the directions of Prime Minister’s Office (PMO).

If the proposed NMC Bill is passed in the Parliament, the MBBS graduates would not have to appear in a separate exam after clearing the MBBS final exam for admission to PG medical programmes.

“According to the amendments in the fresh NMC Bill, entry into the PG programmes will be based on the results of the National Exit Test, which would be held as a common exam across the country,” the official sources were quoted saying by national dailies.

The candidates who wish to pursue Medical PG through All India Institute of Medical Sciences (AIIMS) will have to appear in the AIIMS PG entrance exam as the revised NMC Draft Bill on NEET PG scrap does not speak on AIIMS PG admissions.

NEET PG Scrap: No effect on DNB CET and Other Medical PG Admissions

The NMC Bill, earlier was introduced in the Parliament on December 2017 but with the dissolution of 16th Lok Sabha, it lapsed.

When it was earlier introduced in the lower house in 2017, the Bill aimed to replace to replace Medical Council of India Act, 1956, even as, making a provision of beginning a ‘bridge-course’ to allow practitioners of alternative medicines to pursue MBBS programme and Allopathy Medical Sciences.

The first Bill also discussed a proposal for a national-level licentiate exam for all MBBS graduates for awarding licence to practice in India.