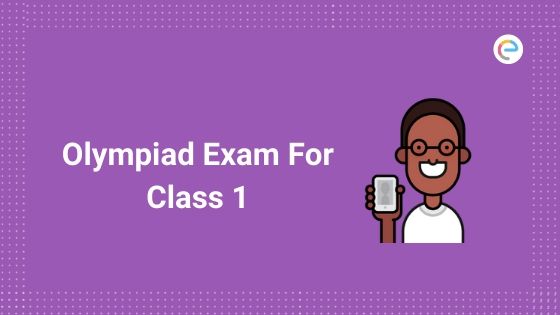 Olympiad Exams For Class 1: Education and competition are closely interlinked with each other. Various competitive exams are conducted right from the early grades of school. The most popular of these exams are called the Olympiads and are usually conducted in two levels: Level 1 (Olympiad exams for Class 1-6) and Level 2 (Olympiad exams for Class 7-12).

These Olympiad examinations are conducted by the Science Olympiad Foundation to enhance the knowledge of students as well as to identify the young talents in the country. Various other organizations and educational bodies also conduct these exams. Therefore, any student who is enrolled from Class 1 to 12 is eligible to take part in these Olympiad exams.

In this article, we will be going to cover all the Olympiad exams for class 1. But before going any further, we will take a close look at the significance of such exams.

Significance Of Olympiad Exam for Class 1

The Science Olympiad Foundation is a non-profit organization based in New Delhi. The Foundation focuses on identifying the capabilities of a child by making them evolve in this competitive world. Let’s understand some why Olympiad exams for Class 1 are important:

Let us take a look at the list of different Olympiad exams for Class 1:

This article is relevant for students who want to appear for these Olympiad exams of Class 1. You can find the examination details in the next sections:

Mathematics always gives a horrifying look to students and this is where most of the students lose their maximum marks in various exams. The aim of International Mathematics Olympiad for Class 1 is to help students get rid of this fear of Mathematics at a very early stage of their lives.

National Cyber Olympiad (NCO) assesses the students in the area of cyber industry such that the Science Olympiad Foundation successfully identifies the future scientists and IT talent from different cities of the nation.

Science Olympiad Foundation with the help of IGKO assesses the students’ general awareness. The exam is conducted for Students of Class 1 to 10. Given below are some details of this exam for Class 1.

International English Olympiad (IEO) is conducted to test the students’ command and knowledge of English language and grammar. It is conducted for students of Classes 1 to 12. Given below are the significant details for the corresponding Olympiad exam for Class 1.

IIO assesses the knowledge of students on the grounds of Computer Science discipline. It is conducted by Silverzone which aims to identify the young IT talents from different parts of the world.

UIMO assesses the knowledge of students in the area of Logical and Mathematical Reasoning by helping them analyse their strengths and weaknesses in the corresponding subjects.

ABHO assesses the knowledge and command of students over Hindi language. The corresponding exam conducted by Silverzone fulfils the aim of promoting India’s national language to students of Class 1 to 10.

IOM assesses the student’s knowledge in the areas of Mathematics by developing a unique ability to simplify questions and then solving it. IOM is conducted by Silverzone for students of Class 1 to 12.

IOS examines the students’ ability and expertise in the field of Science. The corresponding exam is conducted by Silverzone with an aim to inculcate creativity in students from a young age.

IOEL assesses the competence and knowledge of the students in English language. It is conducted by Silverzone and is held annually at national as well as international levels.

Any student from Class 1 to 10 can take ITHO which is held annually.

ISSO tests the student’s academic knowledge on the grounds of their critical thinking, creative thinking and decision-making capabilities. Let us look at the corresponding Olympiad exam for Class 1.

NIMO is conducted for students from Class 1 to 10 and assesses the students’ knowledge and hold in Mathematics.

NBTO assesses the student’s knowledge in the area of Biotechnology with the aim of inspiring the younger generation to enhance the scope of their view.

National Space Science Olympiad (NSSO) is conducted by Eduheal Foundation for students of Classes 1 to 12. The aim of this Olympiad exam for Class 1 is to discover young talents in the country who wish to achieve a successful career in Space and Research industry.

NISO is conducted by Eduheal Foundation to assess the student’s knowledge in the area of science and research. It aims to promote the significance of science in the world and different technological developments happening around the world.

ACCO is conducted by Eduheal Foundation to assess students’ knowledge in the areas of science and research. It aims to promote the significance of science in the world and different technological developments happening around the world.

HBTSE assesses the students’ problem-solving and logical analysing skills. The corresponding exam is conducted by Hummingbird Foundation that emphasises the subjects of Science, Mathematics and Intelligence Ability.

HCO aims to assess the knowledge of students in the area of Computer Science and Information Technology at the national and international level. The objective of this exam is to identify the young talent in the spheres of the computer technology world.

HEO tests the students’ knowledge and commands over the English language. The corresponding Olympiad exam for Class 1 is held as per the consideration of national and international standards every year. Let’s look at the details of this exam.

So, now you have the list of the most popular Class 1 Olympiad exams. We hope it helps you.

If you have any doubt or want to start your preparations for such Olympiad exams, you can reach out to us in the comment section below and we will get back to you as soon as possible.

Stay tuned to embibe.com for updates on Olympiad exams.