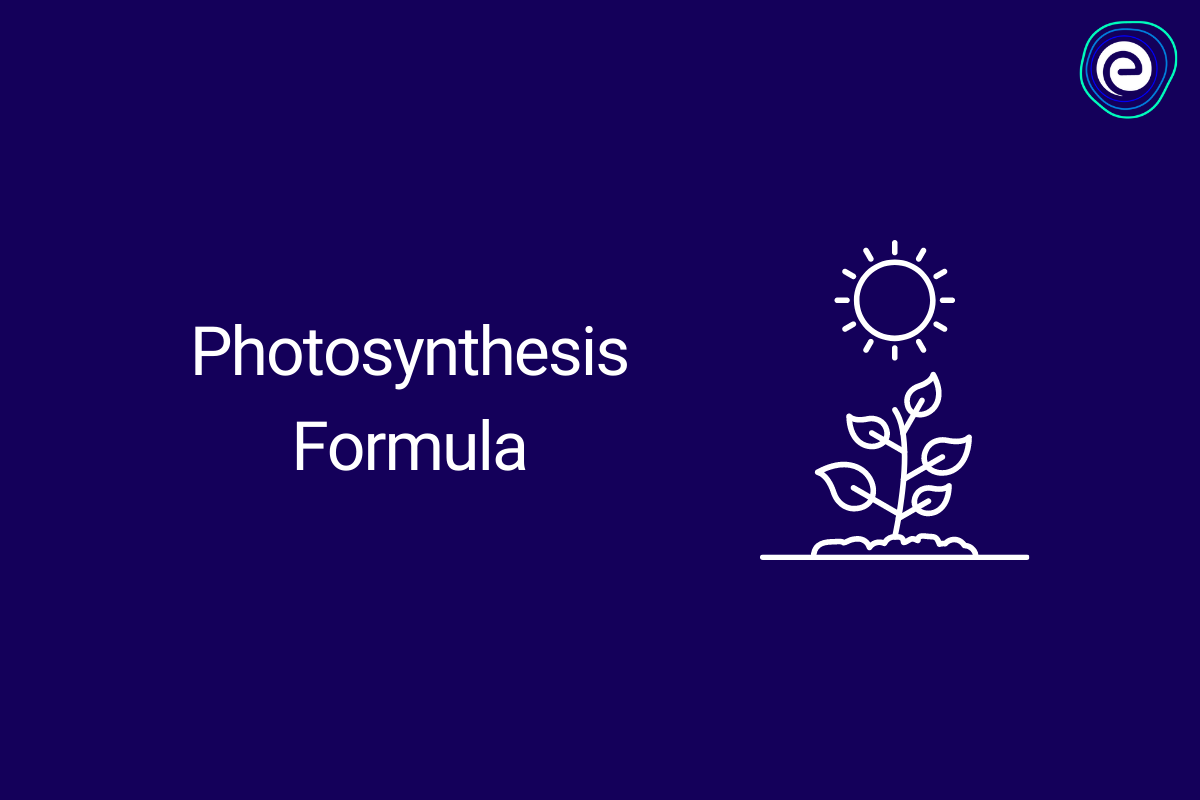 In this article, we will learn in detail about Photosynthesis Formula. The Sun is, as we all know, the major source of energy for all living things. But do you realise how much we rely on plants for our food? Photosynthesis is the process through which plants absorb the Sun’s energy and utilise it to make food. Let’s learn more about this process, which is essential for all living things to survive.

Photosynthesis is the process by which autotrophs like plants, algae and some microorganisms capture and convert solar energy into chemical energy. This process recycles oxygen into the atmosphere by using carbon dioxide produced by all breathing creatures.

Let us now dive deep into understanding what Photosynthesis Formula is, how it is measured, etc. Continue reading to know more.

There are two types of photosynthetic processes.

In this type of Photosynthesis, light energy from the Sun transfers electrons from water \(\left( {{{\rm{H}}_2}{\rm{O}}} \right)\) to carbon dioxide \(\left( {{\rm{C}}{{\rm{O}}_2}} \right)\) to produce carbohydrates. \({\rm{C}}{{\rm{O}}_2}\) is “reduced” or gains electrons during this transfer, and the water becomes “oxidized” or loses electrons. This oxidation-reduction reaction produces oxygen along with carbohydrates.

Oxygenic photosynthesis counterbalances respiration. Respiration involves the production of carbon dioxide by all breathing organisms, whereas Photosynthesis involves reintroducing oxygen to the atmosphere.

In this, no oxygen is produced as a byproduct and is processed by organisms primarily found in various aquatic habitats.

The overall reaction of Oxygenic Photosynthesis is written as follows:

The following components are essential to Photosynthesis:

Photosynthesis occurs in the chloroplasts, specifically in the grana and stroma regions. The grana consist of disc-shaped membranes stacked into columns like plates. It is the innermost portion of the organelle. The individual discs are called thylakoids and are responsible for the transfer of electrons. Stroma constitutes the empty spaces between columns of grana.

An extensive collection of \(100\) to \(5,000\) pigment molecules constitutes antennae. The function of these structures is to effectively capture light energy from the Sun in the form of photons and transfer it to chlorophyll pigments. The conversion of light energy to chemical energy is complete when a chlorophyll pigment expels an electron and the electron moves to an appropriate recipient.

Reaction centres are the pigments and proteins that convert light energy to chemical energy and initiate electron transfer.

The Photosynthesis process is divided into two stages. These are:

Stage 1: Light-dependent stage (also called light reactions )
These reactions require the presence of sunlight and take place in the thylakoid of the chloroplasts.

The “electron-hole” in the original chlorophyll pigment is filled by taking an electron from water.

Study Everything About Photosynthesis

\({\rm{ATP}}\) and \({\rm{NADPH}}\) obtained from light reactions participate in this step. Both \({\rm{ATP}}\) and \({\rm{NADPH}}\) give \(3\)-phosphoglycerate to one hydrogen atom, creating two molecules of the simple sugar \({\rm{G3P}}\) (glyceraldehyde-\(3\)-phosphate). The two molecules of \({\rm{G3P}}\) are used to build one molecule of glucose. As electrons are added, this part of the light-independent reactions is typically referred to as reduction (or reducing the sugar).

Photosynthesis is the basic cycle of all processes responsible for the survival of organisms on the earth. It is not only essential from the food point of view but also in maintaining the ecological balance of nature. Hence, we must learn about the reactions that take place in it. In this article, we discussed Photosynthesis, Light-dependent and light-independent reactions, and the overall formula of the process.

We have provided some frequently asked questions about Photosynthesis Formula here:

Q.1. What is Photosynthesis for kids?
Ans: Photosynthesis is the process in which green plants traps sunlight and use it to make their food. It requires sunlight, chlorophyll, water, and carbon dioxide gas. Chlorophyll traps energy from sunlight, and plants use this light energy to change water and carbon dioxide into oxygen and sugars. The plants use some of the sugars and store the rest. The oxygen is released into the air.

Q.4. What is Photosynthesis? Explain with the balanced equation?
Ans: Photosynthesis is the process by which plants, in the presence of chlorophyll trap the energy of the Sun, absorb water, and carbon dioxide to produce oxygen and energy in the form of sugar. The balanced chemical equation is as follows: