Closure and Commutative Properties of Real Numbers: Meaning and Examples

Change does not happen by itself. A cause always accompanies a change in a substance. Ice, for example, does not melt to generate water on its own. Ice must be heated to melt and turn into water. Change is divided into two types namely, physical and chemical changes.

There are two types of changes as listed below:

A physical change is a temporary and easily reversible change in which the physical properties (e.g., physical state, shape, size, appearance, density etc.) of a substance change. Some physical changes are: glowing of an electric bulb, sublimation of iodine, melting of wax, melting of sulphur, evaporation of water and other liquids, formation of dew, crystallization of salt, freezing of liquids, drying of wet clothes, bending of a glass tube, etc.

Change of state (or form) in water is a physical change. On heating, ice melts, and water evaporates. On cooling, the water vapour cools to form water and water freezes to form ice. This is a reversible change where the form of water changes on reversing the conditions. Melting of wax and butter is the change of state.

2. Making Mixtures is a Physical Change

We mix iron filings with powdered sulphur; it forms a mixture from which iron filings can be separated from sulphur.

In all physical changes, the change is temporary and reversible. No new substance is formed.

A physical change is a temporary change in which only the physical properties of the substance are changed. On reversing or removing the cause of the change, the substance regains its original form.

Experiments to Examine Changes in a Few Substances

The changes are temporary in nature and can be reversed. Such changes are called physical changes.

Experiment: By putting around \(2\,{\rm{g}}\) of candle wax in a dry hard glass test tube. With the use of a Bunsen burner flame, slowly melt the wax in a test tube. What are your observations?

When the wax melts, it turns into a colourless liquid. Hold the test tube in cold water to cool it down. What are your observations?

The molten wax hardens. As a result, we can state that wax melts when heated, and liquid wax solidifies when cooled.

Experiment: By using tongs to hold a short piece of platinum or nichrome wire. In a non-luminous Bunsen flame, hold the wire’s end. What are your observations?

The wire’s end gets red hot. Remove the wire end from the Bunsen flame and set it aside to cool. What are your observations?

The colour of the wire returns to its previous state.

Similarly, when electricity passes through a light bulb, the filaments become white-hot and emit light. When the electricity is turned off, the filament produces no light. As a result, the bulb’s look change is only transitory.

(i) No new substances are formed during a physical change

When ice is heated, it melts and turns into water. When the water is heated further, it turns into steam. The steam condenses and becomes water when it cools. The water forms into ice as it cools further.

Ice, water, and steam molecules, always have two hydrogen atoms and one oxygen atom. As a result, we can conclude that no new substances are formed.

When we add ordinary salt to the water, a salt solution is formed, but no change in the molecules occurs. Water evaporates during evaporation, leaving the salt behind.

When a permanent magnet is stroked across a piece of iron, it becomes magnetic. Magnetized iron, on the other hand, loses its magnetic when hammering. When the wax is heated, it turns into a liquid. However, when liquid wax cools, it solidifies.

(iii) There is no change in weight during a physical change

When ten grams of solid wax is melted, it yields \(10\) grams of molten wax.

We have provided some of the common examples of physical changes below: 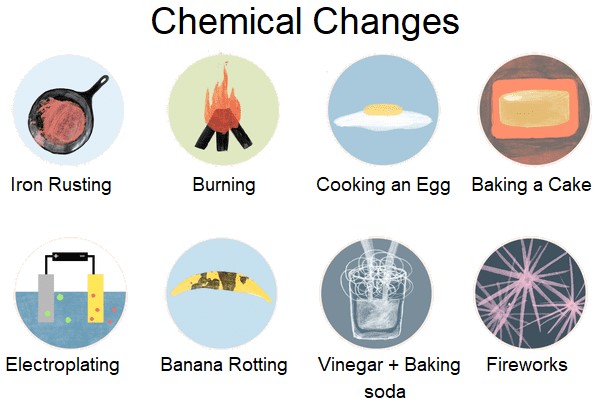 The magnesium ribbon produces a bright white flame that produces a lot of heat and light. It leaves white ash behind, which is generally referred to as magnesium oxide.

The magnesium oxide so form does not change to magnesium ribbon on cooling. Thus, we can conclude; the change brought about in magnesium is permanent in nature; a new product is formed with entirely different properties, and a large amount of heat and light energy is evolved..

Experiment-2: \(2\,{\rm{g}}\) of sugar are placed in a hard glass test tube. Strongly heat the test tube. What are your observations?

When the sugar melts, it turns brown. It emits steam when heated further, which condenses on the cooler areas of the test tube. The residue in the test tube has a dark colour to it. The alteration does not reverse after it cools.

As a result, sugar heating is a permanent change. Sugar decomposes into charcoal, which is a type of carbon that is black. It also emits steam, which is made up of water.

A change in which the original property of a substance being used is changed to new material with new properties. The change cannot be reversed. Some examples are:

(i) When a chemical change occurs, new substances with entirely new properties are formed

Heat some sugar crystals in a test tube over a flame. Gradually, the crystal sugar changes its colour to brown. This brown substance is caramel. Caramel is a different substance from white crystal sugar, which has undergone a chemical change. On further heating, the caramel in the test tube forms a black substance. This is mainly carbon.
Sugar on heating gives out water vapour and carbon. Water and carbon do not taste sweet, and we do not obtain sugar back from caramel or carbon by adding water to it. In this change, sugar changes to new substances and the process are not reversed by reversing the cause. This is a chemical change.

When magnesium is burnt in the air, then the weight of white ash (magnesium oxide) is more than magnesium metal.

Similarly, when iron rusts, the weight of rusted iron is more than that of the original metal because oxygen combines with iron.

Below we have provided some of the common examples of chemical changes:

Difference between Physical and Chemical change

Below we have listed down the difference between physical and chemical change for your reference:

We hope this article on Physical and Chemical Changes has helped you. If you have any queries, drop a comment below, and we will get back to you.

Closure and Commutative Properties of Real Numbers: Meaning and Examples