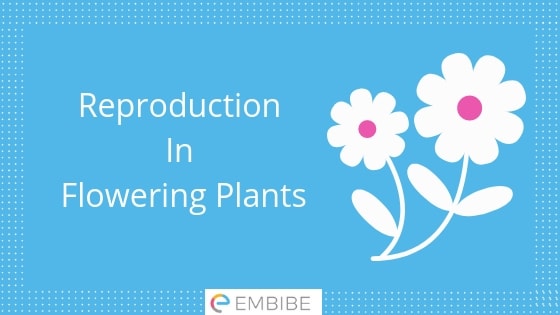 KNOW EVERYTHING ABOUT FLOWERING PLANTS HERE

Before getting into the details of Reproduction In Flowering Plants, let’s have an overview of the table of contents listed in this article:

Angiosperms are the highest in the classification of kingdom Plantae. The angiosperms are the plants wherein, the seed is enclosed within ovary which matures into a fruit. The flower is a specialized, reproductive part of the plant, containing the male and female reproductive organs to facilitate fertilization for production of fruits and seeds. 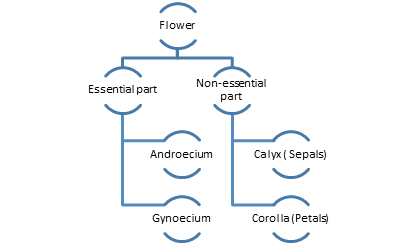 Androecium: It is the male reproductive organ containing anther and filament, collectively called Stamen. The anther is the region where pollen grains are produced for pollination and filament supports the anther. Stamen is the region in which the microsporangium or pollen sac is present. Generally, anther is bi-lobed and tetra-sporangiate. Each microsporangium contains numerous microsporocytes or microspore parent cells (a diploid cell).

Gynoecium: It is the female reproductive organ containing the pistil; which further includes stigma, style, and ovary. The stigma is the region of contact for pollen to enter the pistil, post which it goes through the pollen tube within the style, then fertilizes with egg in the ovary, to form seed and fruit. Style supports the stigma and connects stigma with the ovary. A single pistil can enclose either a single carpel or multiple carpels. Stigma is the tip of the pistil and has a sticky surface to entrap the pollen grain. Ovary can contain one or more ovules. The ovules enclose megasporangium.

Sepals: It is the green part of the flower, which holds the petals and other parts of a flower. It acts as a support for the attachment of petals. The sepals are collectively called calyx. They protect the inner parts of a flower in the budding stage.

Petals: The petals are the colorful part of the flower which attracts bees and other insects for pollination and they also serve as protection to the reproductive area in the flower.

Sexual reproduction is a process of fertilization of male and female gametes present in the flower to form a seed.

Pollination is a process in which the pollen grains from anther is deposited on the receptive region of stigma in the pistil. Pollination is of two types:

Self-pollination is a type of pollination where the pollen is transferred to the stigma of the same flower or another flower in the same plant. It is mostly observed in the plant where both the male and female reproductive parts are present. The genetic material is conserved, and pollen is not wasted but the unwanted traits will prevail in successive generations. It can take place by autogamy, as in rose (within the same flower) or geitonogamy, as in corn (between two flowers of the same plant).

In this type of pollination, the pollen of one plant is transferred to the stigma in another plant, consisting of different heritable configuration. This occurs in plants which are diecious or unisexual; the male and female reproductive organs are found in different plants. It is also called xenogamy. Cross-pollination usually occurs by the intervention of the pollinators like wind, insects, or water. E.g.: Jasmine, coriander, Calotropis. 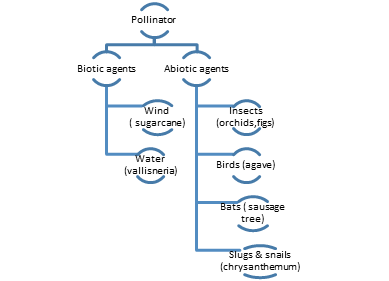 Variation in characteristics and healthier progenies can be obtained. Adaptability is enhanced and more pollen grains are available but largely depends on pollinators. Certain times the reproducibility is reduced since the crossing over can cause a formation of non-fertile offspring.

Megasporangium contains the megaspores, which divides and differentiates to form egg cell and undergoes fertilization when fused with the sperm nucleus.

Megasporocyte or megaspore mother cell, a diploid cell in the megasporangium undergoes meiotic division to form four haploid daughter cells or megaspores. Only one of them survives, the rest have degenerated. This megaspore undergoes mitotic division in the process of megagametogenesis to form 8 nucleated, seven-celled megagametophyte or embryo sac.

The 3 cells (tripodal cells) move towards chalaza, opposite to micropyle, which later degenerates. Two polar nuclei fuse to form a central cell, which upon fusion with sperm nucleus forms endosperm. This is called a triple fusion. The egg cell is supported by two other cells called synergids (guides pollen tube during fertilization), present at micropyle, an opening for the entry of the sperm nucleus during fertilization.

The egg cell is fused with the sperm nucleus to form a zygote, and further into an embryo. The ovule encloses embryo and matures to form seeds. The bi-layered integuments later mature into seed coat.

Fertilization is the process of fusion of haploid male and female gametes to form a diploid zygote, giving rise to the embryo. In angiosperms, the fertilization takes place in the ovule, enclosed within the ovary of the flower, giving rise to seed and fruit respectively.

The egg cell fuses with one of the sperm nuclei to form a zygote and another sperm nucleus fuses with polar nuclei to form endosperm. This process is known as double fertilization. And the fusion of polar nuclei with the sperm nucleus is called triple fusion. The ovule matures to form seed, the integuments from the seed coat. The pollen tube enters through chalaza (chalazogamy), through micropyle (porogamy) or through integuments (monogamy).

The fertilization of haploid male sperm and haploid female egg cell results in a zygote, which later develops into an embryo. This process is known as embryogenesis.

Endosperm is obtained as a result of triple fusion in the embryo sac of the ovule. The endosperm serves as the nourishment tissue for the development of the seed. It often contains starch, proteins, oil, etc., essential for the seed growth and for its unique characteristics. In monocotyledons, endosperm serves as the source of nutrition for the embryo during germination like in wheat, maize and in dicotyledons, the endosperm is absorbed, and cotyledons serve as a source of nutrition to the embryo during germination.

Fruit is the product of fertilization, often eaten as a food and encloses the seed. The seeds in the fruit can germinate into new plant again. Fruits often attract animals, birds and human with its characteristic smell. This gives way for plant propagation through seed dispersal. The fruit often contains essential nutrients and a great source of nourishment.

The parts of fruit include the seed, which encloses endosperm within the embryo and pericarp, which has exocarp (fruit coat), mesocarp (pulp) and endocarp (the inside lining which encloses seed).

Now that you are provided all the necessary information regarding Reproduction In Flowering Plants. Candidates can also solve free practice questions for flowering plants on embibe which further helps you to score good marks in this unit.