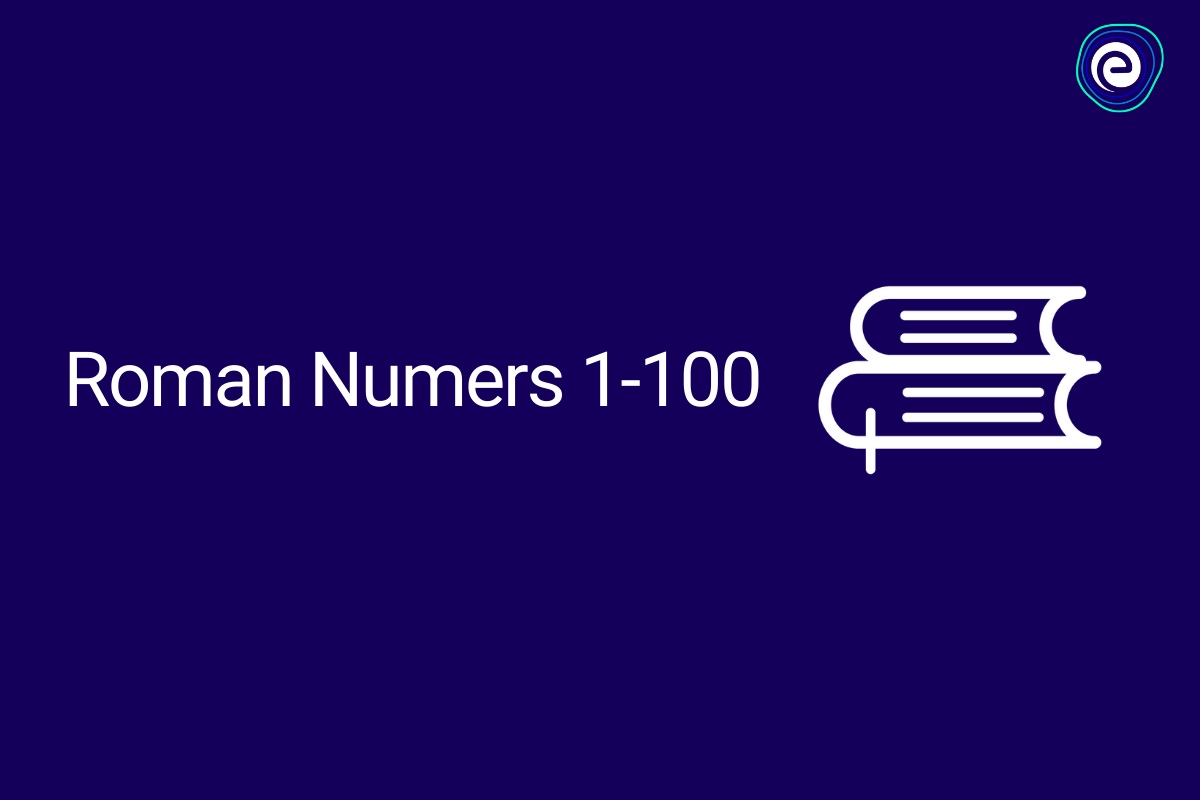 Roman Numbers 1 to 100: Roman Numerals 1-100 include the list of numbers represented in their corresponding roman number translation. Roman Numerals helps students in learning numbers to roman numeric translations. Students who are looking for Roman Numeral 1 to 100 can read this article for complete details. Roman Numerals were first introduced by ancient Rome in 500 B.C. and this was then named after the place of its origin. These are written using the English alphabet. One of the main reasons for introducing Roman Numbers from 1 to 100 was to price various goods and services.

Roman Number (s) are widely spread as these are used in the daily routine of human life. Roman Numerals are used widely in the European region. The Roman numerals are used in some minor applications. Students must know how to write roman figure 1 to 100. Read this article to find a tabular representation that displays Roman Counting from 1 to 100. Students can even download Roman Number 1-100 chart for free and use it for future reference. Continue reading this article to get more information on Roman Number (s).

The chart displaying the Roman Numerals 1-100 is given below:

Let’s look at some important Roman Numbers and how they have represented in Hindu Arabic Numerals 1-1000 System:

How to Convert Numbers to Roman Numbers?

The steps to convert numbers to Roman numerals are as under:

Important Tip – Suppose if you have got a number 1995, then break the number into Thousands, Hundreds, Tens and Ones and start converting.

Let’s look at the 3 primary rules for writing and reading of Roman Numerals:

The subtractive rule for Roman Numbers is tabulated below:

Some important Roman Numerals are tabulated below:

Calculation With The Help of Roman Numerals

Roman numerals are different in use. This is observed in the calculation yet they create complications in the advanced maths calculation and one simple reason is that there is no place for Zero. Students can do subtraction and addition yet multiplication and divisions are complicated.

Use of Roman Numbers

Students must understand the use of roman numerals in our daily life. Below is a list of uses of roman numbers:

FAQs on Roman Numbers One to Hundred

We have provided everything you need to know about 100 Roman Number. However, there are some frequently asked questions about Roman No 1 to 100 which have been answered as follows:

Q1. How do you write 0 in Roman numerals?
A1. In roman numerals, the number 0 is not defined. But 0 is usually called Nalla (Latin Word which means None).

Q5. What does the Roman number XL equal to?
A5. XL means 40 in Roman Numbers.

Now you are provided with all the necessary information regarding Roman Letters 1 to 100. We hope it helps you.

Taking these mock tests will definitely help aspirants in their preparation for annual exams, board exams, and other competitive exams.

We hope this detailed article on Roman Numbers from one to hundred helps you. If you have any queries regarding this article on Roman No. 1 to 100, reach out to us through the comment section below. We will get back to you as soon as possible.