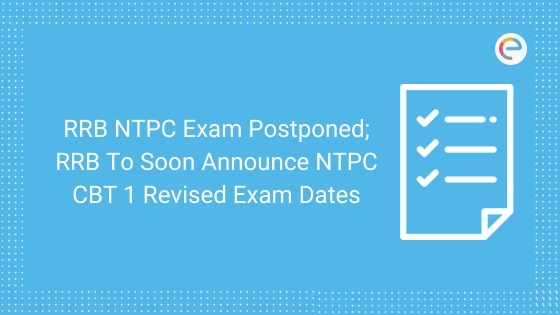 “It was indicated in the employment notice that the 1st stage computer-based test (CBT) tentatively scheduled between June and September 2019. However, it has postponed. The revised schedule will be published in the official websites of all RRBs later”, reads the notification published by examination authority on postponing RRB NTPC exam.

The RRB NTPC CBT 1 was scheduled to be conducted in a computer-based mode between June and September which has been postponed. However, the RRB has not yet notified the new dates for the exam. As per the notice issued by RRBs, a total of 1,26,30,88 candidates have applied for RRB NTPC recruitment 2019.

The RRB NTPC exam will be held in multiple slots and candidates must appear as per the allotted exam slot. As per the RRB NTPC exam pattern, the CBT stage 1 question paper will have a total of 100 multiple choice questions of one mark each. The exam will be conducted for 90 minutes and test-takers to have to attempt 40 questions from General Awareness, 30 from Mathematics and General Intelligence, including Reasoning.

Why RRB NTPC Exam has been Postponed?

Indian Railway Recruitment Board has not cited any reason for postponing RRB NTPC exam 2019. But as per the information published in national dailies, the date for RRB NTPC exam has not been decided because RRB is still in the process to finalize the agency which would conduct the examination process for nearly 1.26 crore job aspirants.

Stay tuned to embibe.com for latest news and updates on RRB NTPC 2019