KNOW EVERYTHING ABOUT THE TRIGONOMETRY TABLE FROM HERE

This is because these functions are basically the ratio of the sides of the triangle. Let’s understand these ratios. 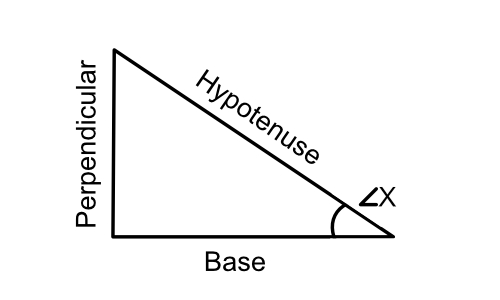 As you can see, the three sides of the triangle are:

a. Base: The side that is horizontal to the plane.

b. Perpendicular: The side making an angle of 90 degree with the Base.

c. Hypotenuse: The longest side of the triangle opposite to the right angled vertex.

Also, X is the angle made by Hypotenuse and Base.

Also, we know that:

So, now you know what the six trigonometric ratios exactly mean.

How To Memorize The Trigonometric Functions?

Some People Have Curly Black Hair Thickly Plastered Back.

Look at the bold, underlined, first letter of each of the words and what they represent:

Given below are the important FAQs related to Trigonometric functions:

So, now you know what the different trigonometric ratios mean. You also know how to memorize them in a manner that you will never forget. We hope it helps you.

If you have any queries regarding this article on Trigonometric Ratios or Trigonometric Functions, do let us know in the comment section below. We will get back to you at the earliest.