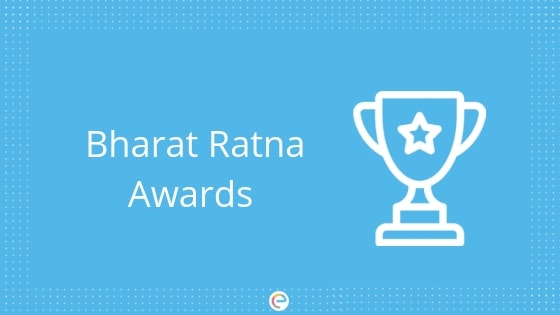 Bharat Ratna Awards 1954 2021: Bharat Ratna is the highest civilian honour awarded by the Union of India and are conferred upon distinctive personalities from various fields. The recommendations for the Bharat Ratna are made by the Prime Minister to the President. A maximum of three nominees is awarded this prestigious award each year. None are awarded in some years. The awardees get a certificate (Sanad) signed by the President and a peepal-leaf-shaped medallion. The awardees get no monetary grant related to the Bharat Ratna Awards.

The Bharat Ratna Awardees rank seventh in the Indian order of priority. The first receiver of this award was politician C. Rajagopalachari, philosopher Sarvepalli Radhakrishnan, and scientist C.V. Raman. Since 1954, Bharat Ratna Award has been presented to 45 individuals including 12 who were awarded posthumous awards. Former Prime Minister Lal Bahadur Shastri became the first individual to be honoured posthumously. The latest recipients of the Bharat Ratna in 2019 are social activist Nanaji Deshmukh (posthumously), singer-music director Bhupen Hazarika (posthumously) and former President of India, Pranab Mukherjee.

Bharat Ratna Award is considered as one of the highest civilian awards of the Republic of India. The award was instituted in 1954 to recognise the exceptional service or performance of the highest order without distinction of race, occupation, position, or sex. Bharat Ratna Award was originally limited to attainment in the arts, literature, science, and public services but in December 2011, the government later expanded the criteria to include any field of human achievement. Sachin Tendulkar who aged 40 then, became the youngest receiver of this prestigious award while social reformer Dhondo Keshav Karve was the oldest receiver to receive the Bharat Ratna Award on his 100th birthday.

Get To Know About Padma Awardees Here

It is interesting to know that the original 1954 specifications of the Bharat Ratna Awards was a circle made of gold 35 mm in diameter with a centered sunburst design on the obverse side. The text ‘Bharat Ratna’ which is written in Devanagari script, is inscribed on the upper edge in silver gilt with a wreath set along on the lower edge.

Several bestowals of Bharat Ratna have met with criticism. The posthumous award for M. G. Ramachandran (1988) was considered to have been aimed at wooing the voters for the Tamil Nadu assembly election that year and posthumous awards of Madan Mohan Malaviya (2015) and Vallabhbhai Patel (1991) met with the criticism that they died before the award was created. Bharat Ratna Awards were briefly suspended from July 1977 to January 1980 due to the change in the national government and was again suspended for the second time from August 1992 to December 1995 when several public interest litigations challenged the constitutional validity of the awards.

The year 1997 was the only time when Bharat Ratna Award was announced but not conferred. In 1992, the government decided to give the award posthumously to Subhas Chandra Bose but the decision of awarding Bose posthumously was opposed by those who had refused to accept his death. Following a 1997 Supreme Court decision, the press communique announcing Bose’s award had to be cancelled.

If you have any confusion with this article on Bharat Ratna Awards, do let us know about it in the comments section below and we will get back to you soon.