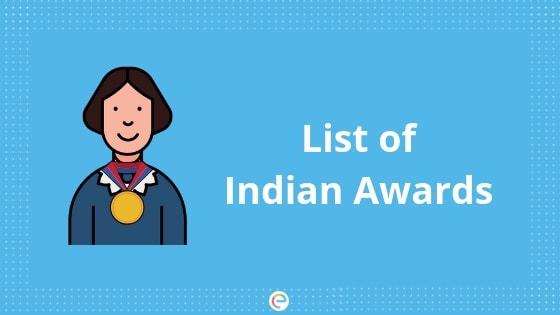 Indian Awards 2021: An award is a symbol of honour presented to a person for their achievements. In India, people are awarded for their excellence in various fields from film-making to service to the nation. Indian awards can be classified mainly into four types, namely, Civilian, Military, Leadership, and Literature awards. There are also other Indian awards granted for bravery, sports, etc.

Civilian awards can be further classified into Bharat Ratna, Padma Vibhushan, Padma Bhushan and Padma Shri awards. Irrespective of race, occupation, position or sex, all Indian citizens are equally eligible for these awards.

Find Out Everything About Current Affairs 2021 Here

Bharat Ratna Awards are presented to a maximum number of 3 persons per year. There are three categories of Padma Awards – Padma Vibhushan, Padma Bhushan and Padma Shri. In 2021 a total of 7 Padma Vibhushan, 10 Padma Bhushan and 102 Padma Shri have been awarded to civilians. Among them, 29 are women awardees, 16 are Posthumous awardees, 10 are civilians from various categories of Foreigners/ PIO/ OCI/ NRI and 1 transgender awardee.

Recipients of Padma Awards in India are generally recommended by an award committee that constitutes the State Governments, Union Territory Administrations, Central Ministries or Institutions of Excellence, etc. Based on the recommendations of the Awards Committee, the awards are presented after the successful approval of the Home Minister, Prime Minister and President. These awards are presented by the President of India and we have included the names of the award recipients for the year 2021 below. Read on to find more.

Bharat Ratna is considered to be the highest civilian award in India and it is conferred upon distinctive personalities for achievement in different fields such as Science, Literature, Arts, Public Services and Sports.

Bharat Ratna literally translates to Jewel of India or Gem of India. The awardees are recommended by the Prime Minister of India to the President. The recipients of this award are granted a certificate signed by the President along with a peepal-leaf-shaped medallion. The award recognizes the exceptional service or performance of the highest order without any distinction. The youngest receiver of the Bharat Ratna Award is Sachin Tendulkar at the age of 40 and the oldest receiver of the Bharat Ratna Award is Dhondo Keshav Karve at the age of 100.

Padma Vibhushan is the second-highest civilian award in India. The award is presented to people for their exceptional and distinguished service in various fields, such as Social Work, Public Affairs, Medicine, Literature, Sports, Civil Services, etc. The award announcement takes place every year on Republic day.

Here is the list of Padma Vibhushan recipients and the fields they provided exceptional service in:

Padma Bhushan is the third-highest civilian award and like other awards, Padma Bhushan is also awarded to people who offered their exceptional services in their respective fields.

Padma Shri is the fourth-highest civilian award in India. This award is conferred upon people from various areas, such as Arts, Education, Sports, Medicine, Public Affairs, Social Service, Industry, Science and Literature.

The list below includes the names of few recipients of the Padma Shri awards 2021:

Check Out The Complete List of Padma Awardees 2021 Here

Param Veer Chakra is the highest award for military services, and it is bestowed on the uppermost height of forfeit during battles or wars. So far only 20 army personnel and one air force personnel received this award.

Veer Chakra is awarded for bravery in the battleground. It is the third highest award for military services.

Ashok Chakra is one of the peacetime awards and is presented for valour, courageous action or self-sacrifice away from the battlefield.  Kirti Chakra comes second on the list followed by Shaurya Chakra.

There are various other awards as well. Dada Saheb Phalke Award considered India’s highest award in cinema which is presented annually by the Government of India for lifetime contribution to Indian cinema.

Indian Awards represent a great honour. Questions related to awards and honours are often asked in various competitive exams, like IBPS PO, SBI PO, SSC exams, RRB exams, etc. Candidates appearing for these exams for government jobs must be aware of the name of the recipients of important awards, especially, Indian Awards. They should also be aware of other events and issues of national and international events.

Find Out Everything About Top Current Affairs 2021 Here

We hope you are satisfied with this article on Indian Awards and if you have any doubt, do let us know in the comment section below and we will get back to you at the earliest.