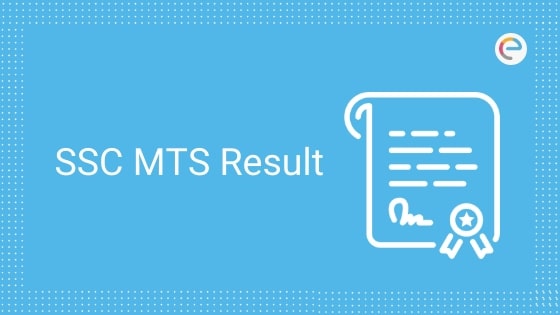 SSC MTS Result 2020: The Staff Selection Commission has announced the SSC 2019 result dates for JHT Paper-II, CGL Tier-I, JE Paper-II, MTS Paper-II, CGL 2018 Tier-III. SSC will release the SSC MTS Result for Tier 2 on 31st October 2020. The SSC MTS 2019 Tier II was conducted on 24th November 2019. The result will be released in the form of a merit list. However, candidates can also check their score by logging in to their account by entering the Registration Number and Password.

We bring you a comprehensive article on SSC Multi Tasking Staff Result to give you a clear picture of the same.

Before getting into the details of SSC MTS Scorecard, let us have a quick overview of the SSC MTS 2020 important dates:

How To Check SSC MTS Result?

The answer keys for all the regions and slots will be declared before the SSC MTS result is released.

Candidates whose names will feature in the merit list will be intimated regarding the verification of documents. Candidates high in merit will be given preference for selection. The final list will be issued later by the regional SSCs.

As the vacancies are in two age groups, i.e., (i) 18 to 25 years and (ii) 18 to 27 years, there will be separate age group-wise, State/ UT-wise and category-wise cutoffs in the final SSC MTS result. For candidates who are eligible for both the age-groups, vacancies will first be filled in the age-group of 18-25 years.

The SSC MTS result is finalized by officials of the Staff Selection Commission after normalizing the marks for all slots and regions across India. This is done to keep all aspirants at an equal footing.

SSC MTS merit list will have the following details mentioned on it:

The SSC MTS scorecard will have the following additional details:

The regional websites if SSC along with cutoff are in the table below:

The table below shows the SSC regions and the states under each of them:

Some of the FAQs and their answers are as under:

Q1. Will the answer keys be released before SSC MTS result declaration?

A1. Yes, the result will not be declared before the answer keys are released.

Q2. Once the SSC MTS result is declared, can it be challenged?

A2. No. Once the SSC MTS result is declared, it cannot be challenged.

So, now you know everything about SSC Multi Tasking Staff Result. We hope this detailed article helps you.

If you have any queries pertaining to any aspect of the exam, feel free to ask in the comment section below and we will get back to you at the earliest.