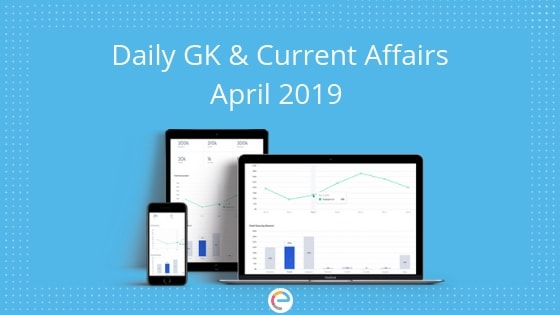 Current Affairs April 2019: General Awareness Section can be the easiest and qualifying section in most competitive exams with the right focus. To bag a good score in these sections one must follow the current affairs for at least a few minutes on a daily basis. Current affairs are vastly diversified with topics from politics, finance, sports, etc and getting lost in this vastness might be confusing sometimes. It is essential for the candidates who are preparing for competitive exams to know what topics to focus on instead of wandering. GK can be divided into static and dynamic. Static GK will involve topics from Indian History, Geography, Indian Polity, Indian Economy, etc and these topics can be grasped by various general knowledge based books. Dynamic GK, on the other hand, will be based on daily happenings around the world and following them regularly will aid in cracking the competitive exams. For dynamic GK, start by reading news from quality outlets. You can start right away by bookmarking this article.

Current Affairs April 2019 is specifically designed to provide you with the information on top happenings around the world to make sure your limited and precious time is well spent. Whether you are preparing for a written test or an interview of any competitive exam, you have come to the right place to enhance your GK knowledge.

Indonesia to relocate its capital from Jakarta

NCLT approved the merger of IndusInd Bank and BFIL

World Day for Safety and Health at Work observed

Government extends ban on import of milk products from China

International Day of Multilateralism and Diplomacy for Peace 2019

IN Ships to participate in International Fleet Review at Qingdao, China

US to end sanctions waivers for all importers of Iranian oil, India to be hit

CBSE to allow visual aids for disabled kids from 2020

Indo-Pacific Wing Set up in the Foreign Office

India to be Guest of Honour at ADIBF 2019

E-Cigarettes May Get Banned In India

PCI urges media to do objective reporting on polls

Namami Gange gets global recognition at the world summit

India and Singapore Kick Off Joint Military Exercise In Jhansi

The government retains interest rate for General Provident Fund at 8%

RBI issues norms for banks to set up currency chests

Nagaland observes the 75th anniversary of Battle of Kohima

BIS, IIT Delhi to Collaborate on Standardisation and Conformity Assessment

Manufacturing growth slips to a six-month low in March

NuGen Mobility Summit 2019 to be held in November

US approves a sale of 24 MH 60 helicopters to India

State of the Climate in 2018 shows accelerating climate change impacts

Here are a few tips that can help you crack the General Awareness section of any competitive exam:

Current Affairs April will assist you in your preparation to crack any competitive exams when given an appropriate amount of your time. The above-mentioned information is skimmed several times to present you with only the top and the best news for that day.  So make sure you follow this article every day and keep an eye on the updates since we only include the best current affairs around the world. If you are preparing for any banking exam, in particular, you can take Bank Mock Test on Embibe for free. These bank mock tests will help you analyze your performance in all sections. Mostly all the banking exams follow more or less the same paper structure, practicing for the general awareness section here will give you an idea on the questions flow and exam pattern.

Bookmark this page to stay updated on the latest Current Affairs April 2019.

Hope we are able to satisfy you with the latest and top current Affairs for the month of April 2019. If you face any issue with this article on Current Affairs April 2019, do let us know about it in the comment section below and we will get back to you right away.

Embibe wishes you all the very best for your exams!!