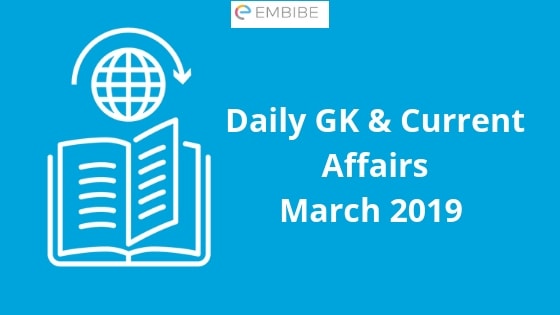 Current Affairs March 2019:  Did you ever notice the General Awareness section of any banking exam or any competitive exam is the easiest and most qualifying section of all? But only if you follow the current affairs or happenings daily! All you have to do to follow the topmost current affairs for that particular day is to just bookmark this page and the information will be presented to you on a daily basis.

Current affairs or the general knowledge 2019 will aid in uplifting your scores in banking exams. Moreover, this section only demands a very few minutes per day and you are all set for the examination. This article on Current Affairs March 2019 will provide you every day with the top current affairs for that particular day of March 2019 by informing you on the insights of happenings around the world, so that you will not miss anything important. No matter what exam you are preparing Current Affairs March 2019 will help you prepare for general awareness section of all banking exams as well as other competitive exams like IBPS, SBI, RBI, SSC etc.

Follow Current Affairs March 2019 to stay up to date and to enhance your knowledge on GK every day.

Look below for the latest Current Affairs March 2019:

Facebook sets up round the clock response team for elections

CBSE to include AI, yoga as new subjects

In largest-ever naval exercise, India and Australia to practice hunting submarines together

ESPNcricinfo Superstats launched, will add ‘layer of quality and value’ to traditional numbers

International Day of Forests observed with theme ‘Forests and Education’

Kazakhstan renames its capital as ‘Nursultan’

WhatsApp to Work with Nasscom to Impart Digital Literacy before elections

Justice Pinaki Chandra Ghose to be the First Lokpal of India

British Army to get a Specialised Gurkha Infantry Battalion

RBI to continue with SBI, ICICI and HDFC Bank as D-SIBs

Festival of Innovation and Entrepreneurship inaugurated at Gujarat

World Sleep Day 2019: What are the different kinds of sleep disorders?

India, US to set up six nuclear power plants in India

Soumya Swaminathan appointed as Chief Scientist of WHO

The US Plans To End India’s Preferential Trade Status

Cricket to be re-introduced in Asian Games

Prayagraj Kumbh Mela 2019 makes it to the Guinness World Records

K P Bezbaruah re-appointed as Chairman of Tea Board

April 2019-March 2020 to be observed as Construction-Technology Year

Gwalior to have a Centre for Disability Sports

Department of Empowerment of Persons with Disabilities sets World Record

Cabinet approves setting up of SPV for disinvestment of Air India

We hope that this article on GK Current Affairs March 2019 helps you in your preparation of general awareness section. Bookmark this page to stay updated on the changes made in this article on a regular basis.

The current affairs 2019 mentioned here in this article are skimmed from the most important happenings and top 10 current affairs for the day around you. When provided your sincere attention to the latest current affairs, you will definitely see an improvement in your scores. This article will help you with any government and competitive exams with general awareness section. So make sure you follow this article regularly and keep an eye on the updates since we include all important current affairs in India. If you are preparing for any banking exam, in particular, you can take Bank Mock Test on Embibe for free. These bank mock tests will help you analyze your performance in all sections. Mostly all the banking exams follow more or less the same paper structure, practicing for the general awareness section here will give you an idea on the questions flow and exam pattern.

If you face any issue with this article on Current Affairs March 2019, do let us know about it in the comment section below and we will get back to you right away.

Embibe wishes you all the very best for your exams!!