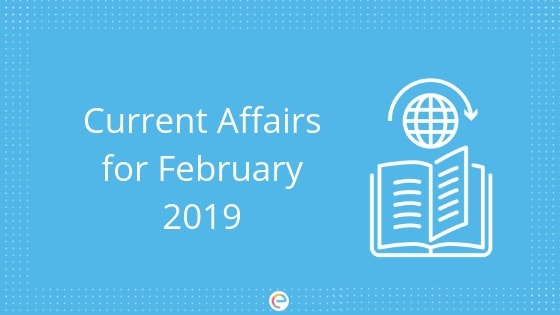 Current Affairs February 2019: The General Awareness section of any banking exam has long been ignored and for the wrong reasons. This section, in fact, is the most qualifying section in the paper. With serious preparation, this section can uplift your overall marks. Along with the purpose of aiding you in scoring well in the general awareness section, this article by Embibe will help you in staying up-to-date with the ongoing events as well. This article on Current Affairs February 2019 can be referred to get an insight into Current Affairs for Banking exams like IBPS, SBI, RBI, SSC etc, General Awareness, and General Studies for all the competitive examinations as well as to enhance one’s knowledge of GK.

Look below for the latest current affairs of February 2019:

India-Bangladesh joint military exercise to be held from March 2

National Institute of Design Inaugurated at Bhopal and Jorhat

Kelly Knight Craft is the new US ambassador to the UN

HAL places an order with Thales for Rocket Launchers

India to stop its share of water flowing into Pakistan

MOU with Canadian University for Research on Environmental Issues

Festival of India begins in Nepal

New company to be established under the Department of Space

India raises customs duty on all goods imported from Pakistan

Ghumot to be declared as Goa’s heritage musical instrument

Cabinet approves the introduction of Registration of Marriage of NRI Bill

Education gets the highest allocation in Bihar Budget

Prime Minister’s Research Fellowship is being initiated to attract the bright and meritorious students into research within the country. Students selected for the fellowship are given fellowship for 5 years – Rs.70,000/– per month for the first two years, Rs. 75,000/- per month in the third year and Rs.80,000 per month in 4th and 5th year with an annual research grant of Rs. 2 lakh.

The first batch of 4 Boeing heavy-lift helicopters arrives in India from the US.

US-India CEO Forum to be held on February 14

Zero Fatality Corridor to be launched by Delhi Government

Cabinet approves the abolition of Ombudsman for Direct and Indirect taxes

Amendment to the Banning of Unregulated Deposit Schemes Bill, 2018

Survey of all agricultural households in India

Price Monitoring and Research Unit set up in Kerala

Measures for the protection of Sentinelese Tribe

‘Freedom of the City of London’ awarded to Sanjiv Chadha

US, Russia suspend the INF Treaty

Appointment of Cooperatives to enhance agribusiness in Maharashtra

4 February-  World Cancer Day is observed across the world

We hope that this article on Current Affairs February 2019 aids you in your preparation of general awareness section. Bookmark this page to stay updated on the changes made in this article on a regular basis. Each news and info mentioned above provides you the best of information on the current events and happenings taking place near you. It is essential to give sincere attention to general awareness section of the paper. Diligent preparation of this section will help you in scoring well both section-wise as well as an overall basis. To get an idea of the paper pattern you can take Bank Mock Test on Embibe. Mostly all the banking exams follow more or less the same paper structure, practising for the general awareness section here will give you an idea on the questions flow and exam pattern.

If you face any issue with this article on Current Affairs February 2019, do let us know about it in the comment section below and we will get back to you right away.