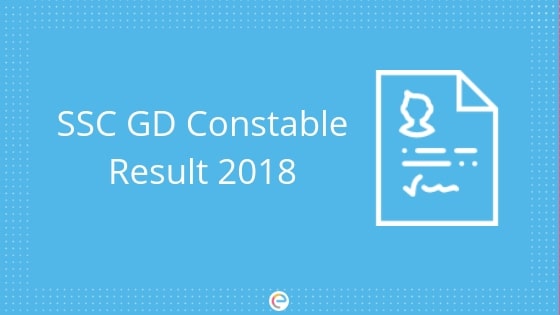 SSC GD Result 2018-19: SSC GD is a three-tier exam conducted by the Staff Selection Commission (SSC) for recruitment of General Duty (GD) Constables in CAPFs, NIA, SSF and Rifleman (GD) in Assam Rifles Examination, 2018. As per the recent update, SSC has released the SSC GD PET/ PST Result on the official website. All the candidates who have appeared for the PET/PST can now download their SSC GD PET/ PST result from the link available here. The SSC Constable GD result has been released in the form of a merit list. The SSC Constable GD merit list (list of shortlisted candidates) consists of the name and roll number of candidates selected for the upcoming Medical Examination. The list of  The PET/ PST was conducted for the shortlisted candidates from August 13 to September 23, 2019.

Candidates who have cleared the PET/PST will be called for the next round of the selection process – Detailed Medical Examination (DME). In this article, we will tell you all the necessary information about SSC GD Constable Result 2018. You will be able to download the revised SSC GD Constable Merit list PDF from here. Also, the steps to check SSC GD Constable result marks will be provided. Read on to find out.

As mentioned above, SSC GD revised result has been released in the form of merit list. Prior to the SSC GD PET/ PST Merit List, the SSC GD result & revised result for the Written Exam was declared on its official website. The SSC GD result was released separately for each of the 8 categories as mentioned in the notification in the form of a list of qualified candidates. However, there were discrepancies found in the SSC GD Answer Key. So, the Commission reviewed the SSC GD answer key and made necessary changes. The answer key was revised for a total of around 13 questions and accordingly, the revised SSC GD Result has been released. Candidates can now visit the SSC official website – ssc.nic.in and download the SSC GD merit list. Let us now see how to download the SSC GD revised merit lists.

SSC GD Result for the Computer Based Examination was declared on the official website of SSC – ssc.nic.in.

Follow the steps as under to check your SSC GD Constable Result 2018:

The SSC GD Revised Merit List PDFs can be downloaded from the table below:

In addition, SSC has released two lists comprising candidates who were earlier declared as ‘Qualified’ but now do not qualify as per the revised answer key:

The PDFs containing the list of the qualified candidates for the respective categories are tabulated below:

SSC GD Constable cut off for female candidates (for SSF only) against all India vacancies are tabulated below:

SSC GD Constable cutoff for male candidates (for NIA & SSF) against all India vacancies are tabulated below:

What Happens After SSC GD Result For Computer Based Exam Is Released?

After the SSC GD Constable Result for the Computer Based Exam is released, candidates 10 times the number of vacancies will be called for Physical Efficiency Test / Physical Standard Test (PET / PST).

Final selection (from all those who cleared the Computer Based Exam, PET / PST, DME, and Document Verification) will be made on the basis of merit, i.e. on the basis of marks secured by the candidate in the Computer Based Exam as well as the preferences of the organizations / CAPFs as given by the candidates while filling up the SSC GD online application form.

The final SSC GD Result 2018 to be made available on the SSC official website will have the following information about the candidates:

The Frequently Asked Questions (FAQs) about SSC GD Result are as under:

Remember that getting or not getting selected in SSC GD 2019 is not the end of the world. It’s great if you get selected. If not, don’t lose hope. You will get many such opportunities. Just stay confident.

We hope this detailed article on SSC GD Result 2018 helps you. If you have any query, drop a comment below. We will be happy to help you.