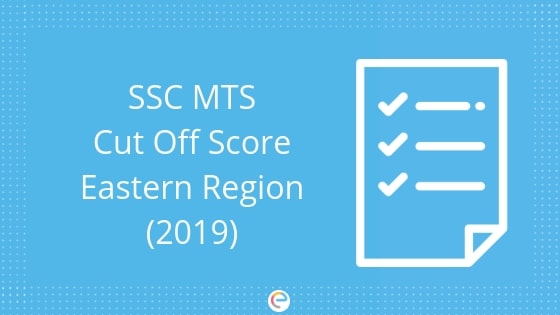 SSC MTS Cutoff Eastern Region (ER): Staff Selection Commission, SSC in short, is conducting the Stage 1 (Tier 1) of SSC MTS 2019 from 2nd August 2019 to 6th September 2019. After the exams are conducted, the raw scores secured by the candidates will be normalized and based on that the SSC MTS cutoff will be declared. In the meanwhile, candidates appearing for the exam can refer to the SSC MTS previous year cutoff and plan their preparation accordingly so as to score higher than the SSC MTS cutoff. To help you with this, we are providing you with the SSC MTS cutoff Eastern Region (ER) in this article. We will also update this article once the official notification is released.

Let us have an overview of the SSC Eastern Region (ER):

The SSC MTS Cutoff Eastern Region (ER) 2019 will be decided based on the following parameters:

In the SSC MTS 2017, candidates who wanted to apply for MTS posts in more than one State or Union Territory (UT) were required to submit only one online application. Therefore, only one All-India common cut-off was fixed as tabulated below:

The steps to check SSC MTS cutoff Eastern Region are as under:

The following details will be mentioned on your SSC MTS scorecard:

So, now you have all the necessary information regarding SSC MTS cutoff Eastern region (ER). Prepare for the exam keeping in mind this cutoff marks and plan to score higher than that. You can also take  SSC MTS Mock Tests on Embibe. It will be of great help to you in your SSC MTS preparation.

Know How To Prepare For SSC MTS 2019 Here

We hope this article on SSC MTS cutoff Eastern region helps you. If you have any query, drop a comment below and we will get back to you at the earliest.