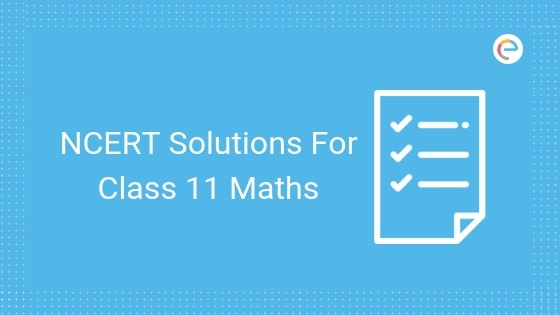 Glance further to get the NCERT Solutions for CBSE Class 11 Maths. The solutions below are in the chapter-wise PDF form for each section and have been prepared by the best faculties at Embibe.

The CBSE NCERT Solutions for 11th Class Maths are provided below:

A collection of objects which is well defined is considered a set. Set is defined by an existing rule, with which it is possible to conclude whether an object is a part of a set and whether a collection constitutes a set. Problems and solutions in this set tell us as to how to ascertain whether a collection is set, different types of sets, algebra of sets and power sets, how sets are represented using symbols, and Venn diagrams.

Much of mathematics is about finding a pattern – a recognisable link between quantities that change. In your daily life, you come across many patterns that characterise relations such as brother and sister, father and son, teacher and student. In mathematics also, you come across many relations such as number m is less than number n, line l is parallel to line m, set A is a subset of set B.

In all these, you notice that a relation involves pairs of objects in a certain order. In this chapter, you will learn how to link pairs of objects from two sets and then introduce relations between the two objects in the pair. Finally, you will also learn about special relations which will qualify to be functions. The concept of function is very important in mathematics since it captures the idea of a mathematically precise correspondence between one quantity with the other.

The word ‘trigonometry’ is derived from the Greek words ‘trigon’ and ‘metron’ and it means ‘measuring the sides of a triangle’. The subject was originally developed to solve geometric problems involving triangles. It was studied by sea captains for navigation, surveyor to map out the new lands, by engineers and others.

One key basis for mathematical thinking is deductive reasoning. In contrast to deduction, inductive reasoning depends on working with each case and developing a conjecture by observing incidences until you have observed each and every case. It is frequently used in mathematics and is a key aspect of scientific reasoning, where collecting and analysing data is the norm. Thus, in simple language, you can say the word induction means the generalisation from particular cases or facts.

In algebra or in other disciplines of mathematics, there are certain results or statements that are formulated in terms of n, where n is a positive integer. To prove such statements the well-suited principle that is used–based on the specific technique, is known as the principle of mathematical induction.

In earlier classes, you must have studied linear equations in one and two variables and quadratic equations in one variable. You had seen that the equation x2 + 1 = 0 has no real solution as x2 + 1 = 0 gives x2 = – 1 and square of every real number is non-negative. So, you need to extend the real number system to a larger system so that you can find the solution of the equation x2 = – 1. In fact, the main objective is to solve the equation ax2 + bx + c = 0, where D = b2 – 4ac < 0, which is not possible in the system of real numbers.

In previous classes, you would have studied equations in one variable and two variables and also solved some statement problems by translating them in the form of equations. Now a natural question arises: ‘Is it always possible to translate a statement problem in the form of an equation? For example, the height of all the students in your class is less than 160 cm. Your classroom can occupy at most 60 tables or chairs or both. Here you get certain statements involving a sign ‘<’ (less than), ‘>’ (greater than), ‘≤’ (less than or equal) and ≥ (greater than or equal) which are known as inequalities. In this chapter, you will study linear inequalities in one and two variables. The study of inequalities is very useful in solving problems in the field of science, mathematics, statistics, optimization problems, economics, psychology, etc.

Suppose you have a suitcase with a number lock. The number lock has 4 wheels each labelled with 10 digits from 0 to 9. The lock can be opened if 4 specific digits are arranged in a particular sequence with no repetition. Somehow, you have forgotten this specific sequence of digits. You remember only the first digit which is 7. In order to open the lock, how many sequences of 3-digits you may have to check with? To answer this question, you may, immediately, start listing all possible arrangements of 9 remaining digits taken 3 at a time. But, this method will be tedious, because the number of possible sequences may be large. Here, in this chapter, you shall learn some basic counting techniques which will enable you to answer this question without actually listing 3-digit arrangements.

In prior classes, you learned how to find the squares and cubes of binomials like a + b and a – b. Using them, you could evaluate the numerical values of numbers like (98)2 = (100 – 2)2 , (999)3 = (1000 – 1)3 , etc. However, for higher powers like (98) 5, (101) 6, etc., the calculations become difficult by using repeated multiplication. This difficulty was overcome by a theorem known as the Binomial Theorem. It gives an easier way to expand (a + b) n, where n is an integer or a rational number. In this chapter, you will study the Binomial Theorem for positive integral indices only.

In mathematics, the word, “sequence” is used in much the same way as it is in ordinary English. When it is said that a collection of objects is listed in a sequence, it usually means that the collection is ordered in such a way that it has an identified first member, second member, third member and so on. For example, the population of human beings or bacteria at different times form a sequence. The amount of money deposited in a bank, over a number of years form a sequence.

You must now be familiar with two-dimensional coordinate geometry from earlier classes. Mainly, it is a combination of algebra and geometry. A systematic study of geometry by the use of algebra was first carried out by celebrated French philosopher and mathematician René Descartes, in his book ‘La Géométry, published in 1637. This book introduced the notion of the equation of a curve and related analytical methods into the study of geometry. The resulting combination of analysis and geometry is referred to now as Analytical geometry.

This chapter is an introduction to Calculus. Calculus is that branch of mathematics which mainly deals with the study of change in the value of a function as the points in the domain change. First, we give an intuitive idea of derivative (without actually defining it). Then we give a naive definition of limit and study some algebra of limits. Then we will bring you back the definition of derivative and study some algebra of derivatives. You will also obtain derivatives of certain standard functions.

In this chapter, some basic ideas of Mathematical Reasoning will be discussed. As you know that human beings evolved from the lower species over many millennia. The main asset that made humans “superior” to other species was the ability to reason. How well this ability can be used depends on each person’s power of reasoning. How to develop this power? Here, the process of reasoning, especially in the context of mathematics, will be talked about. In mathematical language, there are two kinds of reasoning – inductive and deductive. The inductive reasoning in the context of mathematical induction has already been discussed. In this chapter, you shall also learn about some fundamentals of deductive reasoning.

You must be knowing that statistics deals with data collected for specific purposes. You can make decisions about the data by analyzing and interpreting it. In earlier classes, you have studied methods of representing data both graphically and in tabular form. This representation reveals certain salient features or characteristics of the data. You have also studied the methods of finding a representative value for the given data. This value is called the measure of central tendency.

In earlier classes, you studied the concept of probability as a measure of uncertainty of various phenomena. You have also obtained the probability of getting an even number in throwing a die as 3 6 i.e., 1 2. Here the total possible outcomes are 1,2,3,4,5 and 6 (six in number). The outcomes in favour of the event of ‘getting an even number’ are 2,4,6 (i.e., three in number). In general, to obtain the probability of an event, we find the ratio of the number of outcomes favourable to the event, to the total number of equally likely outcomes. This theory of probability is known as the classical theory of probability.

Along with solving the questions, you can also take the Class 11 Revision Test for free on Embibe. Also, if you plan to appear for JEE Main in the near future then you can take JEE Main Mock Test on Embibe to get the best out of your preparation. Taking the mock test and practising questions will prepare you for various other competitive exams.

If you have any query regarding this article on CBSE NCERT Solutions for Class 11 Maths, do let us know about it in the comment section below and we will get back to you soon.