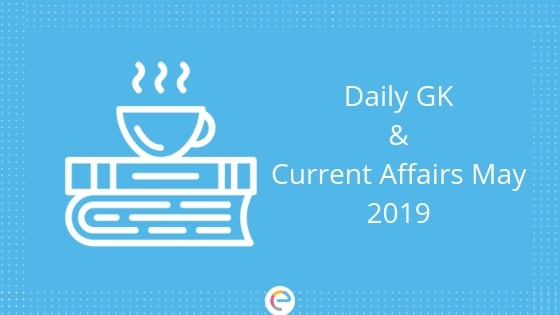 GK & Current Affairs May 2019| GK & Current Affairs can be the easiest and most scoring section in all government, bank and other competitive exams when the right focus is applied. Majority of the questions from competitive entrance exams will be based on daily current affairs which are also known as dynamic GK. It is very important for the aspirants of any government, bank jobs to stay updated on the dynamic GK since it changes from time to time. And staying up to date with all current affairs may be easier with this article.

Current Affairs May is specifically designed by our academic experts to provide you with the top news and information on that particular day. With our Current affairs May, you will never feel the need to visit multiple outlets for quality information. Moreover, current affairs May is helpful in the preparation of various competitive exams such as IBPS, UPSC, SSC, Bank PO, Bank Clerk, IBPS, Railways, Government Jobs, UPPSC, MPSC, and other state exams, all at one place i.e., here at Embibe.

Follow Current Affairs May 2019 to stay up to date and to enhance your knowledge on GK every day.

Look below for the latest Current Affairs May 2019:

India moves up to 43rd in competitiveness; Singapore tops the chart

US removed India, Switzerland from its currency monitoring list

International Day of United Nations Peacekeepers celebrated on May 29

India, Sri Lanka and Japan signed a deal to develop a container terminal at Colombo

Telangana to set up country’s first ‘Blockchain District in Hyderabad

Standard Chartered launched Trade A1 Engine in partnership with IBM

Malaysia to send back hundreds of tonnes of imported plastic waste

India elected to Executive Board of first UN-Habitat Assembly

DRDO successfully test-fired the new version of the Akash

P S Golay was sworn in as Sikkim chief minister

NSIL, the commercial arm of ISRO, was inaugurated in Bengaluru

World Thyroid Day observed on May 25

UN downgraded the global economic growth forecast to 2.7% in 2019

Department of Biotechnology signed MoU with DAE on cancer research

WHO: Algeria and Argentina declared Malaria-Free

ISRO to conduct seven mega missions in the next 10 years

MoU signed for Plantation of 10,000 Rudraksha Trees in Uttarakhand

China blocks all editions of Wikipedia

IMF bails out cash-strapped Pakistan with a new loan

IAF gets its first Apache Guardian attack helicopter in the US

WHO partners with IFBA to eliminate Trans Fat

Two Indians, among 115 UN personnel, staff honored for sacrifice in the line of duty

India re-elected as an observer to Arctic Council

India, UK in talks to build Naval supercarrier under ‘Make in India’

US may propose a hike in H-1B visa application fee

Karnataka takes steps to limit the weight of School Bags

Government and IIT-Delhi signs MoU to set up a Centre of Excellence for Waste to Wealth Technologies.

Second lunar mission Chandrayaan-2 to be launched in July

Now that you are provided with the May Current Affairs, take GK & current affairs quiz based on the information by clicking on the link below.

Candidates who are appearing for various bank exams and government exams can now prepare for their exams on Embibe for free. Practicing on Embibe will help you identify your weaker areas and will help you improve your overall score eventually. Embibe has a variety of practice questions based on general knowledge, bank exams, and foundation level subjects. No matter what kind of competitive exams you are appearing for, Embibe has covered most of the syllabus for you. One of the benefits of preparing on Embibe is that each and every question is specifically designed to help you in improving score and speed. So click here at the earliest to prepare for government and bank exams.

Bookmark this page to stay updated on the changes made in this article on a regular basis.

If you are preparing for any banking exam, in particular, you can take the Bank Mock Test on Embibe for free. These bank mock tests will help you analyze your performance in all sections. Mostly all the banking exams follow more or less the same paper structure, practicing for the general awareness section here will give you an idea on the questions flow and exam pattern.

If you face any issue with this article on Current Affairs May 2019, do let us know about it in the comment section below and we will get back to you right away.

Embibe wishes you all the very best for your exams !!