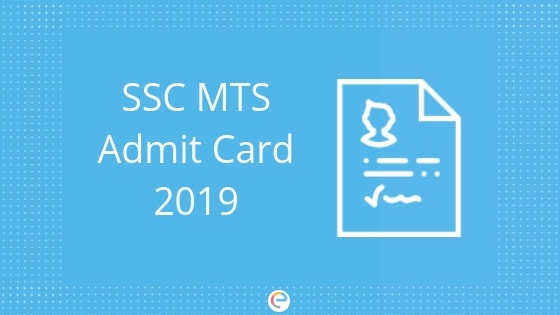 The SSC MTS exam is conducted for the recruitment of Multi Tasking Staff (Non-Technical) in Central Government offices across the country. It is a two-tier exam – Paper 1 (Objective Test) conducted in the online mode and Paper 2 (Descriptive Test) which will be conducted offline.

1st Step: Visit the SSC official website of the SSC region you applied from.

5th Step: Your SSC MTS Admit Card will appear on the screen. Download it and save it. Print out copies of the same for future reference.

Please note that the SSC MTS Admit Card is a document of utmost importance. Candidates must preserve it until the end of the recruitment process.

The following details will be mentioned on SSC MTS Admit Card:

Candidates must check all the details mentioned on their SSC MTS Admit Card. If they find any discrepancy or missing details, they should immediately report it to the official authorities and get it rectified. It is for this reason, and to avoid problems due to heavy traffic at the last moment, candidates must download the SSC MTS Admit Card as early as possible once it is released and not wait until the last moment.

Documents To Be Carried Along With SSC MTS Admit Card

SSC MTS aspirants need to carry the following documents to the exam center along with their SSC MTS Admit Card:

Candidates who fail to carry any one of the above-mentioned documents or the SSC MTS Admit Card will not be allowed to write the exam.

The regional SSC websites are as under:

The important dates for SSC MTS 2019 are as under:

Some of the Frequently Asked Questions (FAQs) regarding SSC MTS 2019 Admit Card are as under:

Q1: I am unable to log in, the system is showing error while filling the login credentials. What should I do?

Ans: Check the inbox of your registered email ID or phone number and see if you have entered the correct login credentials.

Q2: The page to download SSC MTS Admit Card is not opening. What is the reason for that?

Ans: This usually happens when a large number of people are on the website at the same time. Try again after some time. Slow internet connection could be another reason.

Q3: Who can download SSC MTS Admit Card? When will SSC MTS Hall Ticket be released?

Ans:  Candidates who successfully complete the online registration will be able to download the SSC MTS Admit Card. The date is not announced yet.

Q4: Is it mandatory to carry SSC MTS Admit Card to appear for the exam?

Ans: Yes, candidates have to carry the admit card along with all the necessary documents.

We hope that this article on SSC MTS Admit Card has answered all your questions pertaining to SSC MTS Hall Ticket. Now, you can just concentrate on your preparation and finish the entire SSC MTS syllabus. For that, you need to focus on and finish all the topics included in SSC MTS syllabus and practice them thoroughly. You should also revise all the concepts and attempt tests to know the level of your preparation.

Candidates can take SSC MTS Mock Test Series during their preparation for SSC MTS. Embibe provides these tests for free. These tests will help you to know your strengths and weakness.

If you have any more question pertaining to SSC MTS 2019 Admit Card / Hall Ticket / Call Letter, you can drop your queries in the comment sections below. We will get back to you at the earliest.