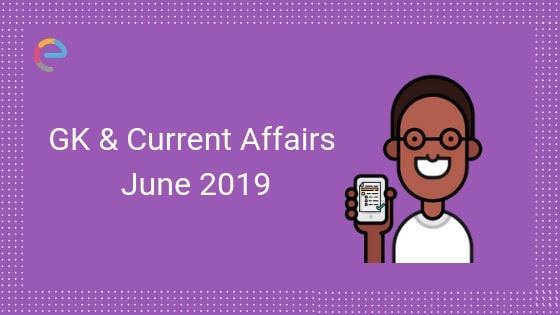 Current Affairs June 2019: General Awareness Section is the easiest scorable section in many competitive exams when followed on a daily basis. Preparing for the General Awareness section in any competitive exams must involve a regular habit of following daily happenings of world, nation, state, etc. By following current affairs June daily, you will not only learn new things but also update yourself with the dynamic knowledge that is changing every day. In order to score well in the General Awareness section, one must have a hold on both national and worldwide politics, sports, economics, entertainment and many more. We have covered all top 2019 current affairs in this article from each area to give you a wholesome satisfaction for the day. Follow the current affairs June daily article by bookmarking this page and the latest and top 2019 news will directly be delivered here.

Also, the June Current Affairs are specifically designed to help you in the preparation for various government, banking exams such as IBPS, UPSC, SSC, Bank PO, Bank Clerk, IBPS, Railways, Government Jobs, UPPSC, MPSC, and other state exams, etc. Wait no more and go through the Latest Current Affairs for June 2019 here.

Look below for the latest Current Affairs June 2019:

Sharad Kumar Saraf is the new president of FIEO

Mumbai listed among the top 20 most expensive cities in Asia

29 June observed as International Day of the Tropics

Amish Tripathi appointed as the Director of the Nehru Centre, London

Amit Agarwal, head of Amazon India appointed as the Chairman of IAMAI

Rajasthan tops the list of MHA Police Station ranking for 2018

Nirmala Sitharaman among the 100 most influential UK power list

World Bank approves $147 Million Loan to the Government of Jharkhand

Indian Navy launches Operation Sankalp in the Gulf of Oman

The first iron ore mine discovered in Bangladesh

India has the highest data usage per smartphone in the World: Report

Canara Bank decided to grant only three free cash deposits of up to Rs 50,000

Satya Nadella, Shantanu Narayen ranked among the top 10 US CEOs

Om Birla has been elected as the 17th Lok Sabha Speaker

Amazon India is the country’s most attractive employer brand, says the survey

India to host COP-14 of UNCCD

India to celebrate the 20th anniversary of victory in Operation VIJAY

Govt. demands fingerprinting of messages from WhatsApp to trace the origin

World Day to Combat Desertification and Drought observed on June 17

India’s trade deficit widened to USD 15.36 bn in May month

India to impose retaliatory tariffs on 29 US goods

RBI to infuse Rs.15,000 crore into the financial system through the purchase of government bonds

India hands over NPR 1.6 billion to Nepal for post-quake reconstruction

Chandrayaan-2 to be launched on July 15

Canada to ban single-use plastics from 2021

Wipro to acquire US International TechneGroup for 312 crore

Rajnath Singh to chair the Committee on Parliamentary Affairs

India and France to carry out Garuda, a two-week long mega air exercise

10 per cent decline in the approval rate of H 1B visa by the US: Report

Astronomers discovered the Forbidden Planet NGTS- 4b in the Neptunian Desert

National Science Film Festival of India to be held in Agartala

World No Tobacco Day (WNTD) observed on 31 May

Facebook plans to launch its cryptocurrency, GlobalCoin, by the first quarter of 2020

Candidates who are appearing for various bank exams and government exams can now prepare for their exams on Embibe for free. Practicing on Embibe will help you identify your weaker areas and will help you improve your overall score eventually. Embibe has a variety of practice questions based on general knowledge, bank exams, and foundation level subjects. One of the benefits of preparing on Embibe is that each and every question is specifically designed to help you in improving score and speed.

If you are preparing for any banking exam, in particular, you can take the Bank Mock Test on Embibe for free. These bank mock tests will help you analyze your performance in all sections. Mostly all the banking exams follow more or less the same paper structure, practicing for the general awareness section here will give you an idea on the questions flow and exam pattern.

If you face any issue with this article on Current Affairs June 2019, do let us know about it in the comment section below and we will get back to you right away.