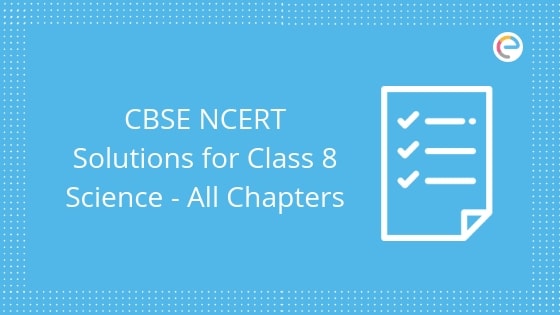 The questions present in the in-text requires one to have great knowledge and practical understanding of the concepts. These questions can be tricky sometimes if you have not understood the concept clearly. You can also expect these questions to come in the board examination. We suggest that every student should try to solve the questions first and if they fail to arrive at the answer then only they should refer to the solutions. Students who are preparing for the class 10 exams will be able to understand how to solve such kind of tricky questions.

This is the page where you can find CBSE NCERT Solutions for Class 8 Science all chapters. We have solutions for Chapter 1: Crop Production and Management to Chapter 18: Pollution of Air and Water. Read a short description of all the chapters so that you can have a glimpse about what you are going to study in your upcoming classes.

Advantages of CBSE NCERT Solutions for Class 8 Science by Embibe

Here are a few advantages of reading these NCERT Solutions if you are doubting whether you should solve these questions or not.

Here are some glance chapters of the CBSE NCERT Class 8 Science Chapters.

Plants can make their own food with the help of the photosynthesis process. But when it comes to Animals and Human beings, we have to depend on plants and animals for food. There are so many people in this world and in order to meet large population demand we need to go for regular production, proper management and distribution of food. When the same type of the plant is cultivated on a large scale then it is called a crop. Not every crop can be grown in the same weather. Some crops can grow in the winter season (called as Rabi crops) while others in the rainy season (called as Kharif crops). Some basic practices of  crop production are:

The clothes which we are wearing is made up of thread or also called as fabrics. Fabric is made up of small fibres. These fibres can be made from natural as well as artificial resources. Most of the stuff at home is made up of some type of fibre. Natural fibres like cotton, wool, silk, etc., are obtained from plants or animals while synthetic fibres are made by a human being using some chemical treatment. Synthetic fibre is like a chain of small units joined together. Each small unit is basically a chemical substance. When these chemical substances are joined together it is called a polymer.

One key difference that you must have noticed is that if you beat an iron, its shape will change whereas if you beat the wood, it will break. The iron falls under the category of metals whereas the wood falls under the category of non-metal. The property of being able to bend when it is hit can be found only in metals. If you constantly beat a metal then eventually it will form the shape of a sheet. This property of the metal is called as malleability. There are some other properties like thermal conductivity, ductility, sonorous which are shown by metals but not non-metals.

In order to run automobiles, we use various kinds of fuels in our day to day life. Some of the fuels used in our day to day life are cow dung, wood, coal, charcoal, petrol, diesel, compressed natural gas (CNG), etc. When we burn candle we will see a flame but when we burn fuels like coal we will not see the flame. Also, students will find the types of materials which will not give flame while burning. In this chapter, students will learn about the chemical process of burning and the types of flames produced during the process of burning. Also, students will learn about what is Combustion?, How do we control fire? Types of Combustion, Flame, Structure of a Flame, what is Fuel? and fuel efficiency.

In this chapter students will learn that Wildlife sanctuary, National park, and Biosphere reserve are names given to the areas meant for conservation and preservation of forest and wild animals. And that Biodiversity refers to the variety of living organisms in a specific area. Plants and animals of a particular area are known as the flora and fauna of that area. This chapter will also teach the students that endemic species are found only in a particular area. Also, students will learn that migration is the phenomenon of movement of a species from its own habitat to some other habitat for a particular time period every year for a specific purpose like breeding.

This chapter will enlighten the students on the types of cells and their exhibition of various shapes and sizes. Learners will also know about the first observer of cells as well as the number of cells varying from organism to organism. The nucleus is separated from the cytoplasm by a nuclear membrane. Cells without a well organized nucleus, i.e. lacking a nuclear membrane, are called prokaryotic cells. Students will also be informed that coloured bodies called plastids are found in the plant cells only and green plastids containing chlorophyll are called chloroplasts. They will also learn that plant cell has a big central vacuole unlike a number of small vacuoles in animal cells.

This chapter will help the students know about the modes of reproduction process in animals- Sexual and Asexual reproduction. The ovary produces female gametes called ova and the testes produce male gametes called sperms. The fusion of ovum and sperm is called fertilization. The fertilized egg is called a zygote. Fertilization that takes place inside the female body is called internal fertilization. This is observed in human beings and other animals such as hens, cows, and dogs. Students will learn about a lot of things from this chapter which they couldn’t learn otherwise.

This topic will teach students that humans become capable of reproduction after puberty sets in. Between the ages of 11 years and 19 years, children are called adolescents. They will also get to know that the onset of puberty brings about the growth of the reproductive organs. Hair grows at various places on the body. Breasts develop in girls and facial hair (moustache and beard) appear in boys. Voice of boys becomes hoarse as voice box enlarges during adolescence. Also, the students will learn that the sex of the unborn child depends on whether the zygote has XX or XY chromosomes.

Sound is everywhere and there are so many of them. We call sound by different names the sound which is loud and unpleasant we call it noise. When an musical instrument makes a sound we call it a note. When these notes are together we call it music. Firecracker booms, popcorn pops, and bell get dinged. All sounds are produced in the same way i.e. through vibrations. When something moves to and fro at very high speed we call it vibration. Our ear can sense these vibrations, not all vibrations at a particular range. So how does the sound gets delivered to our ears The air around us is made up of tiny particles these particles carry these vibrations to our ears.

In this chapter, natural phenomena like earthquakes and lightning are discussed and how to deal with natural phenomena. Whenever you rub a comb with dry hair and bring it closer to small pieces of paper. The comb attracts small pieces of paper. It is because the comb has acquired some charges and due to the presence of a charge, it is attracting the paper. This indicates that when you rub two bodies, charge distribution takes place. These bodies are called charged bodies. There are two types of charges: positive and negative. In this chapter, some activities have been conducted in order to prove the law of attraction.

Because of light, we can see the world around us. Light is basically the smallest quantity of energy that can be transported. Light is made up of photons, a photon is an elementary particle with no size. It cannot be split, only created or destroyed. Light also has a wave-particle duality means it kind of a particle and a wave at the same time. When we see we are only seeing the tiny spectrum of electromagnetic radiation. Humans have developed good eyes that are seeing only this part of the electromagnetic spectrum. So how does the light is produced? This happens when an electron from a higher state to a lower state emitting energy in the form of radiation. No object in the universe can surpass the speed of light.

Solar System is made up of one star, a handful of planets, more than 100 moons, millions of rocky asteroids and billions of comets. All these bodies revolve around the sun because of the gravity of the sun. Gravity is the force of the sun that pulls all the celestial bodies. There are a total of eight planets namely Mercury, Venus, Earth, Mars, Jupiter, Saturn, Uranus, and Neptune. Venus is the hottest planet among all the eight planets. Earth is the third planet after Mercury and Venus. It is also the fifth-biggest planet in the solar system. Earth takes 365 days to revolve around the sun. Our planet has one moon and it takes 24 hours to revolve around the moon. Most of the asteroids lie between the planet Mars and Jupiter.

In this chapter, we will see how pollution is affection the air and water quality. Earth is covered by a layer of air called an atmosphere. The atmosphere is an envelope of various gasses. The composition of air is 78% nitrogen, 21% oxygen, and the remaining are Carbon dioxide, argon, methane, ozone, and water vapor. The major cause of air pollution is the contamination of undesirable gasses which are harmful to living beings. The substance which contaminates the air is called air pollutants. Air pollutants can be produced from natural sources like smoke and dust arising from forest fires or volcanic eruptions. Human activities like gasses produced from factories, power plants, automobile exhausts, and burning of firewoods and dung cakes.

We hope that this CBSE NCERT Solutions for Class 8 Science has helped you in your studies. If you have any doubt then you can ask it from the link provided below. Our academic experts will help you regarding any educational doubt.