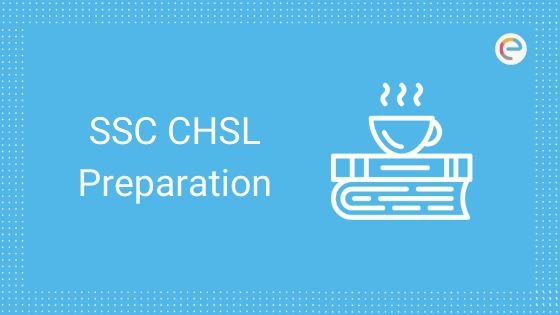 SSC CHSL Preparation: Preparation is the first step to crack your SSC CHSL Tier-I exam. SSC CHSL is the most awaited exam of the year. Every year lakhs of aspirants appear for SSC CHSL, which comprises of four sections in Tier-I. As each of the section is equally important, candidates are required to focus on the syllabus of SSC CHSL. So, clearing all the topics might help them to score their desired marks. Many experts tell you to start reading the newspaper daily and take a Full Mock Test daily. So, if this information is valid or not, we will discuss it in this article. This article will provide you with a complete and detailed SSC CHSL Preparation and Study Schedule for the Tier-I exam.

Tier 1 Objective Test: There are four sections in this exam

Tier 2 Descriptive Test: Essay and Letter or Application, In English or Hindi language.

SSC CHSL’s English Language section will have questions based on Reading Comprehension, Sentence Re-Arrangement, Sentence Improvement, and Spotting Error and Cloze Test. To attempt the English Section, all you need is strong grammar, advanced vocabulary and vast understanding of the text. To master these skills, thesaurus, dictionary and English Newspapers will surely help you.

Around five questions are expected from this section. Some essential tips for reading comprehensions are mentioned below that will come in handy:-

A total of five questions are expected from this section.

This section comprises of One Word Substitution and Idioms & Phrases. Although, this section might comprise of 4 questions only but can make you suffer if not attempted properly. For this section, you have only one trick, which is to go through all the questions from previous year papers and find out the difficulty level.

In this section, you need to work on your word power. Approximately two questions will be asked from this section. Try to grasp more and more words from your surroundings. Try remembering every word you heard/learned by noting them down in a notepad. Study the words and their meanings from your notes.

Quantitative Aptitude is the most challenging and time-consuming section in the entire SSC CHSL Tier-I Exam. And the changes in the new pattern has made it even more competitive than the previous years. Quantitative Aptitude is the only section where you can score 50 out of 50. Learn quick calculations and grasp squares, cubes, square mysqladmin, etc. This will help you to save your time while solving the questions. The questions of Time, Work & Wages are basic level but the type of questions vary from shift to shift. You need to practice all types of the question but of basic level. In Profit, Loss & Discount maximum questions were formula based. If you remember formulas or short tricks, you will get the answer easily and quickly.

The General Awareness questions will be of 10+2 level. A good thing about the GA questions is that you would either know the answer or you won’t. It all depends upon your knowledge. So you need to think clearly and calmly to remember the correct answers. This will keep you away from submitting incorrect answers. Attempt the questions that you can answer accurately within 30 seconds, first. This test is meant to check the knowledge and awareness of the candidates regarding all the ongoing affairs in the world.

Along with the SSC CHSL Preparation Tips, it is important for you to practice and take mock tests regularly. To further enhance your study for the exam, we bring you the SSC CHSL Mock Tests below:

Some of the important FAQs asked by candidates are given below:

1. Can you tell me the full syllabus of General Awareness?

A: As the General Awareness section holds a lot of scope in easy scoring. You can read the full subject-wise SSC CHSL Syllabus here.

2. Similar subjects are there in SSC CHSL and SSC CGL. Can I prepare for SSC CGL from the books of SSC CHSL?

A: No, every book of a particular exam is created keeping the centre of focus as that specific exam only. You can read our article on SSC CGL Books which will guide you better.

3. Can I block the night time to give my mock tests?

A: Yes, night time is considered as the ideal time for giving mock tests by many students. However, you have to analyze the mock after the test and you should NOT leave it for the next day.

So we have explained about SSC CHSL Preparation. Now that you have these tips on how to prepare for SSC CHSL Exam, you can get ahead with your practice! Remember, it is of utmost importance that you also take SSC CHSL Mock Tests. This will help you identify your weaknesses and help you improve from one test to the other. Furthermore, you also get to improve your test-taking skills in terms of time management, question selection, and more.

Embibe wishes you all the best for your SSC CHSL Preparation!