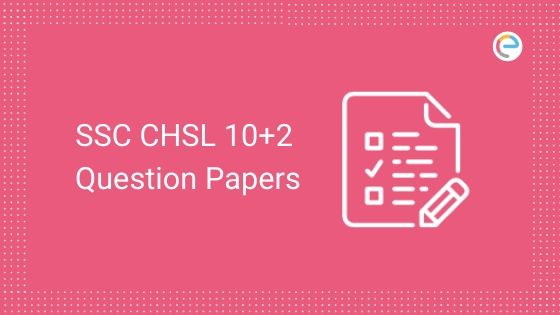 SSC CHSL Question Papers: Candidates who are preparing for Staff Selection Commission’s (SSC) Combined Higher Secondary Level Exam(CHSL) must practice b answering previous year question papers. Since, the exam has been postponed effective from April 20th, 2021 until further notice due to coronavirus outbreak and complete lockdown, it is a great opportunity for candidates because now they have more time to prepare for the exam. Candidates can use the extra time to ramp up their preparations using previous years question papers.

SSC conducts its Combined High School Level exam every year for recruitment to various posts. CHSL is a highly competitive exam and requires proper planning and smart study. Thus, referring to the SSC CHSL previous year papers will help you in your exam preparation. In this article, we will provide you with all the relevant links to download SSC CHSL Previous years papers, Free mock tests, preparation tips and more. Read on to know more.

Referring to the SSC CHSL Previous Year Papers will help the candidates in the following ways:

The first step of your preparation should be to know the SSC CHSL exam pattern and the marking scheme. As the SSC CHSL syllabus for Tier – I includes General Intelligence, Quantitative aptitude, General Awareness, and English Language, solving banking Mock tests will also help you to prepare for the SSC CHSL exam. The exam pattern has been tabulated below:

Quick Note: The total duration of the exam is 60 minutes.

Along with solving previous year papers, it is advisable for you to take an ample amount of mock tests to help you prepare for the exam accordingly. You can take the below-mentioned SSC CHSL Mock Tests as they will help you in managing your time and gain the confidence to take the real exam:

Embibe provides you free SSC CHSL Mock Tests with detailed test analysis which pinpoints your weaknesses on which you need to work to increase your score. Taking the SSC CHSL mock test will not only improve your knowledge but will also improve your test-taking skills. Taking the test here will save your time as it provides a detailed analysis and test report which will help you to instantly know the topics and factors you need to work and improve.

We hope this article on SSC CHSL Previous Year Papers helps you. If you have any query, post it in the comment box below. We will get back to you at the earliest.