Uses of Ether:  Ether is an organic compound containing an oxygen atom and an ether group connected to two alkyl/aryl groups. It is formed by the substitution of a hydrogen atom of a hydrocarbon by an alkoxy (R–O)(R–O) or aryloxy group (Ar–O)(Ar–O) group. They are represented as R–O–R′.R–O–R′. The use of ether is not limited to using it as a disinfectant before an injection. It has a lot of other uses too.

The word ‘Ether’ is derived from the Latin word ‘Aether’, which means the “pure upper, bright air”. Ethers are very light, volatile, flammable, and have a pleasant odour. They exist as a colourless liquid. Now, if the students are curious about the uses of these compounds, they can read this article on the Uses of ethers to clear all their doubts. 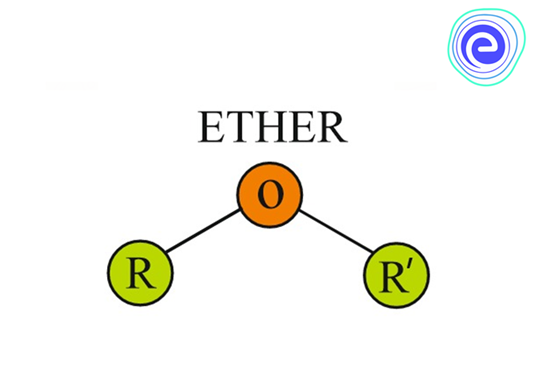 Among the many uses of ethers, we can find them in the fields of medicine, laboratory purposes, perfume, flavouring agents etc. Let’s examine some of their applications in more detail.

Uses of Ether in Medicine

Since the history of medicines, ethers have been widely used in various fields for the treatment of various ailments. Some of their uses in medicines include:

1. Anaesthesia: They are mostly used as anaesthesia in surgeries. As ethers are volatile liquids, they release vapours that are inhaled by the patients or administered intravenously. They cause loss of consciousness to the patients before surgery. For example, diethyl ether is used as potent anaesthesia, and its actions are accompanied by analgesic drugs and also in the relaxation of muscles.
2. Nowadays, Halogenated ethers such as Isoflurane \(\left({{{\text{C}}_3}{{\text{H}}_2}{\text{Cl}}{{\text{F}}_5}{\text{O}}} \right),\) Desflurane \(\left({{{\text{C}}_3}{{\text{H}}_2}{{\text{F}}_6}{\text{O}}} \right)\) and many more are used as effective anaesthesia because of their low toxicity and flammability.
3. Ethers were used in the treatment of diseases like scurvy and pulmonary inflammation.
4. Antiseptic: Ethers were also used as antiseptics. During World War \({\text{II}},\) Ether was used to disinfect the wounds of patients and save them from deadly infections. Still, they are used as antiseptics.
5. Recreational Drugs: Due to their intoxicating and anaesthetic effects, ethers such as diethyl ethers are used as recreational drugs. This means they cause unconsciousness and desired effects in drug addicts and can be used in recreational activities as they are harmless when taken in therapeutic doses.
6. Spirit of Ether: This is a solution of one part diethyl ether and three parts of alcohol (ethanol) and is used as an anodyne (pain killer or hypnotic effect).

Uses of Ether as Solvents

Ethers are quite unreactive. As a result, they are commonly used as solvents for oil, fats, resins, wax, perfumes, etc. Their ability to form Hydrogen-bonds and combine with the weak London forces of the alkyl groups that are bonded to the oxygen makes ethers a good solvent for a wide range of organic compounds. Some examples of the use of Ether as solvents are:

Uses of Ether as Perfuming and Flavouring Agents

Ethers are widely used in the perfumery and aroma industry due to their olfactory and organoleptic properties. They provide flavours to a variety of food and drugs, including fruit-based foods and beverages, desserts, fruit jams, yoghurts, ice cream, chewing gum, or some pharmaceutical preparations. Let’s take some examples:

1. Some of the new compounds of ethers, such as diethyl ether, are particularly useful in the preparation of perfumes or perfumed articles, including soaps, detergents, and household materials in general use such as essential oils, medicines, etc.
2. \(1\)-methoxy-\(3\)-hexanethiol, imparts the flavour of grapefruit, giving beverages a fruity-green, exotic type flavour.
3. Some ethers are also used in giving salty aromas, particularly meat-like aromas, to impart the typical meaty taste to food such as soups and broths, seasonings, snacks, sauces, or ready-to-eat non-veg meals.
4. Methoxy benzene (anisole) is commonly used as a constituent to impart fragrance in the essential oil of anise seeds.

Uses of Ether in Paints

Ethers are used in dyes and paint industries. Some of those ether examples are:

Other Uses of Ether in Our Daily Life

There are some very useful ether compounds besides simple compounds like dimethyl ether, diethyl ether, and methoxy benzene. Examples of such compounds are:

Crown Ether: Crown ethers are cyclic chemical compounds that consist of several ether groups in a cyclic manner. There are several uses of Crown Ethers. Crown ethers are useful for dissolving ionic substances such as potassium permanganate in organic solvents such as isopropanol as they have cavities of different sizes, hence allows binding of specific cations and to be solvated with a high degree of selectivity.

Though we know that ethers are very useful compounds in various fields, fulfilling our needs such as in medicines, perfumery, solvents, and many more, they have some serious side effects also.

In brief, we can say that ethers are a class of organic compounds having the general formula R–O–R′,R–O–R′, and they are very useful in different fields. Ethers were the first used anesthesia in the history of the medical field. They are widely used in medicines as antiseptics also. Some common ether compounds, such as dimethyl ether, diethyl ether, etc., are used as solvents as well as in other fields like perfumery due to their pleasant smell, food flavouring techniques, adding colour and flavours to medicines, paints, and many more. Thus we can say that like alcohols, ethers are also very useful chemical compounds. But we all know that chemicals have side effects also, so we should use them judicially. Toxic exposure to ethers may cause severe side effects to our health.

Let’s look at some of the commonly asked questions about uses of ether:

Q.1: Is Ether still used?
Ans: With the development in the field of medicines, the use of Ether as anaesthesia was banned due to its toxic side effects. Now they are used in some laboratory works and also in medical fields in some countries due to their low cost.

Q.2: What is the importance of ethers in the industry?
Ans: Ethers are used as dyes and as flavoring agents in the paint and pharmaceutical industries. They provide flavour to many foods and drugs, such as fruit-based foods and beverages, desserts, fruit jams, yoghurts, ice cream, chewing gum, or are used for pharmaceutical preparations.

Q.3: What are the two important properties of ethers?
Ans: Ethers have polar \({\text{C}} – {\text{O}}\) bonds and thus have a net dipole moment. Ethers have a much lower boiling point due to their weak polarity. They are very volatile.

Q.6: How are ethers prepared?
Ans: Ethers are most widely prepared by Williamson Ether Synthesis Reaction. In this reaction, a metal alkoxide displaces a halide ion from an alkyl halide by an \({{\text{S}}_{\text{N}}}2\) reaction. The alkoxide ion is prepared by the reaction of an alcohol with a strong base, sodium hydride.

Q.7: How quickly does Ether work during surgery?
Ans: As anesthesia ether works slowly in around \(20\) minutes to bring unconsciousness to the patients before surgery. It is still used in some medical fields.

We hope this detailed article on Uses of Ether helps you in your preparation. If you get stuck do let us know in the comments section below and we will get back to you at the earliest.