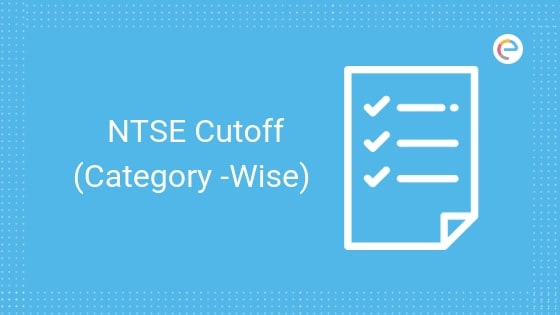 NTSE Cutoff 2019: National Council of Education Research and Training (NCERT) has released the NTSE 2019 cutoff along with the NTSE 2019 result of Stage 2  (final scholarship list). Candidates who have appeared for the NTSE Stage 2 on June 16, 2019, will be able to check their NTSE cutoff 2019. The NTSE cutoff scores have been released on the official website and the same is updated here as well. NTSE cutoff is the minimum score which students need to score in order to qualify for the NTSE scholarship.

NTSE 2019 Stage 2 Cutoff is released by NCERT. Check from the table below.

Besides, the NTSE 2020 notification has been released Candidates who are applying for the NTSE 2020 can start their NTSE preparation right away by taking Free NTSE Most Test from the link below.

The Stage 2 NTSE 2019 Cutoff will determine the candidate’s selection in the NTSE merit list. The NTSE cutoff list consists of cutoff scores for different categories. Students will have to check the cutoff scores of their respective category. Check the table below for the detailed NTSE Stage 2 Cutoff 2019.

State Council Of Educational Research and Training (SCERT)/ Directorate of Government Examination (DGE) of every State or Union Territory will be responsible for releasing the NTSE Stage1 cutoff. The respective states & UTs will be conducting their own exam and release their respective cutoff and result to shortlist the candidates for NTSE Stage 2 exam. The NTSE stage 1 exam is conducted only to select students for the Stage 2 exam and it doesn’t play any role in the NTSE final selection (NTSE final merit list).

A variety of factors are considered in order to prepare the NTSE cutoff 2019. Ths list of cutoff parameters are listed below:

Let’s have a look at the previous year NTSE Stage 2 cutoff based on which the NTSE merit list was prepared.

Let’s have a look at the percentage reservation scheme which will be followed to prepare the NTSE merit list. The details are tabulated below:

Let’s have a look at the State and Union Territory-wise quota which changes once in three years:

We have now provided you with the details on NTSE cut off. This will give you an idea of the upcoming NTSE 2019 cutoff. Once the official NTSE Cutoff is declared, we will be updating it here. This will help you know whether or not you qualify for the NTSE scholarship.

Students appearing for NTSE 2020 should also keep the previous year NTSE cutoff in mind while preparing for the exam. They can also take NTSE mock tests on Embibe which are available for free and will them give a clear idea about the nature of the exam.

We hope this article on NTSE Cut Off helps you. If you have any question feel free to post it in the comment section below. We will get back to you at the earliest.