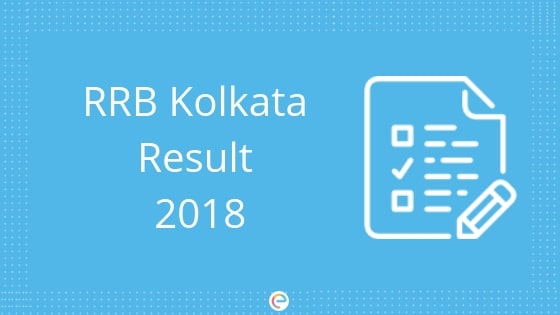 RRB Kolkata Result 2018: The Railway Recruitment Board (RRB) declares RRB ALP and RRB Group D Result on the official website of the respective regions. Result for ALP 1st stage CBT was declared on 20th December 2018 and Group D result will be declared on 13th February 2019. This year RRB Kolkata announced a total vacancy of 777 for RRB ALP posts. The total vacancy for RRB Group D is 2840. In this article, we will provide you with all the necessary information regarding RRB Kolkata Result. Read on to find out.

RRB Kolkata Scorecard for ALP and Group D will have the following details mentioned on it:

Check out the vacancies in RRB Kolkata for ALP and Group D:

Cut Off marks for RRB ALP First Stage is given below:

Cut Off Score for RRB ALP Second Stage Part A is mentioned below:

Cut Off Score for RRB ALP Second Stage Part B is mentioned below:

We bring you the expected cut off marks for RRB Kolkata Group D:

The Previous year (2013-14) cut off marks for RRB Kolkata Group D is tabulated below:

Revised Cut Off For Physically Handicapped

RRB Kolkata Answer Key for ALP and Group D has already been released. RRB releases the answer key to provide transparency to the selection process. Candidates can even challenge the answer key if they are not satisfied. The release of answer key also helps candidates predict their score.

RRB Kolkata Score for ALP can be calculated using this formula:

Applicants can raise objections on the released answer key in the following cases:

Candidates from other RRB regions can click on the links provided below to check their result:

Now that you have all the details about RRB Kolkata Result, we hope you do not face any further issue. Do not be saddened if your Roll Number does not appear in the merit list. You have many opportunities ahead of you. Do not give up. Reach out to us and we will be happy to guide you.

If you have any question regarding RRB Kolkata Result, do drop down your queries in the comment section below and we will get back to you at the earliest.