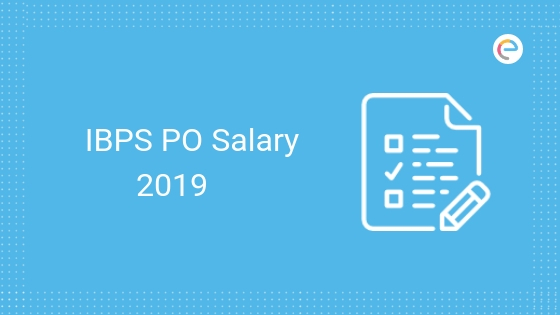 IBPS PO Salary:  The Institute of Banking Personnel Selection (IBPS) has released the official IBPS PO notification. This year, as per the notification, there are more than 4336 vacancies for the post of Probationary Officers in the 17 public sector participating banks. Interested candidates can start filling out the IBPS PO Application Form from 7th August 2019 and the last date to fill out IBPS PO Application Form is 28th August 2019.

There is a huge competition for IBPS PO Bank Exam since this is a centralized exam with several benefits. So the candidates who are interested in applying for IBPS PO Exam must be aware of IBPS PO Salary Structure, Job Profile, Benefits etc.  Read on to find more about IBPS PO Salary.

Before getting into the details of IBPS PO Salary Structure, Work Profile and Promotions, let’s have an overview of the list of major banks participating under IBPS PO:

This means upon joining, the Probationary Officers will get a Basic Salary of Rs 23700. In addition to that, there will be other allowances. The POs will also get an annual increment of Rs 980 for 7 years.

Let us now look into the other allowances included in the IBPS PO Salary that is calculated on the Basic Pay:

In addition to the IBPS PO Salary, there are other advantages and benefits of this job:

The Probationary Officers in various banks have the following roles and responsibilities:

The IBPS PO is a very promising entry-level job in the banking sector. There are ample opportunities for growth, both personally and professionally, in this job. Your growth and promotions from the post of Probationary Officer depend upon your performance and potential; in fact, you can even be promoted to the post of General Manager within a span of 14 years. And promotions from IBPS PO can take you not just to the different parts of India but also to foreign countries as many of these public sector banks have branches in other countries.

The subsequent posts after promotion from IBPS PO are:

If you are appearing for IBPS PO 2019-20, you must give your best shot. Be thorough with the IBPS PO exam pattern and IBPS PO syllabus and create a proper study plan. Make sure your IBPS PO preparation plan looks after all the aspects of a successful test-taking process.

Finish all the topics and solve questions until you master them. Take IBPS PO mock tests once you have finished the whole syllabus and then rectify the mistakes you make. You can take IBPS PO mock tests on Embibe and make use of the Advanced Test Analysis to identify your knowledge gaps and gaps in test-taking strategy. This will help you improve your score from test to test.

We hope this detailed article on IBPS PO Salary helps you. If you have any query regarding IBPS PO Salary, feel free to drop a comment below. We will get back to you.