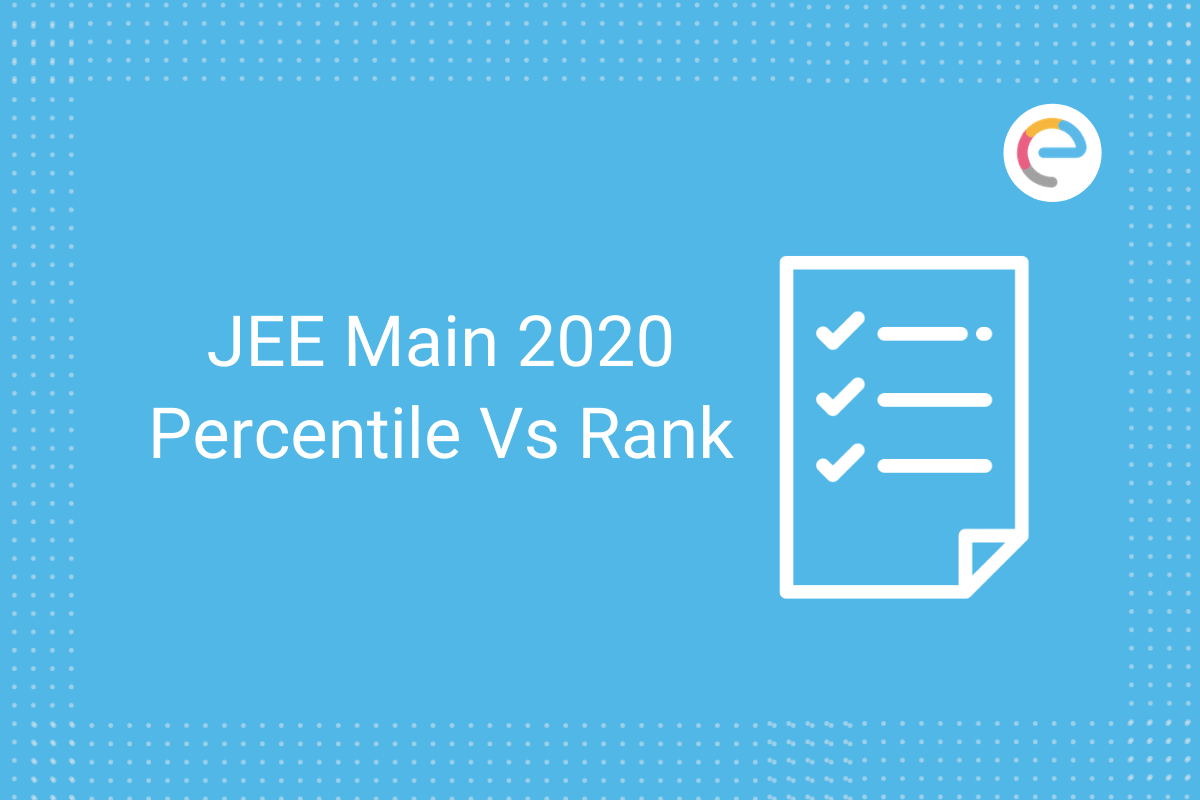 JEE Main Percentile Vs Rank 2020: The National Testing Agency (NTA) conducted the second session of JEE Main 2020 from 1st to 6th September 2020. NTA also released the JEE Main Answer Key (Provisional) on September 8. Candidates were able to calculate their probable JEE Main score and also raise their objections against the answer key. NTA is now reviewing the challenges and making the necessary changes in the answer key. Based on the final answer key, NTA has released the JEE Main Result for April/September on September 11, 2020).

With the September session concluded, the JEE Main Result will now comprise not only the total and subject-wise NTA Scores but also the rank of the candidates (considering both the sessions).

The expected JEE Main Percentile Vs Rank 2020 is as below:

Let’s understand all these things.

The Percentile Score tells how you have performed in comparison to all other students who appeared for the exam. So, it tells you what percentage of the total number of students who appeared for the exam scored less than or equal to that particular percentile in that examination. It is neither the percentage score (which is the percentage of the maximum marks that you have secured) nor the raw marks (absolute marks secured by you).

The formula to calculate percentile score is as under:

So, with this formula, the raw marks of the candidates are normalized and expressed as Percentile Score (also called NTA Score). It also eliminates the discrepancy caused by the variation of difficulty level across various sessions.

JEE Main Percentile Vs Rank 2020: How Does Normalization Eliminate Discrepancies Caused By Variation Of Difficulty Level?

So, let us elaborate it with an example.

Let’s start with the following assumptions:

Now, if we consider the raw scores secured by Candidate A (280) and Candidate B (265) to create the merit list, of course, Candidate A would be the overall topper.

That would be unfair because Session 2 was more difficult than Session 1.

Now, let’s see what happens if we normalize the scores secured by Candidate A and Candidate B using the above formula and express them in Percentile.

No. of candidates who secured a raw score EQUAL TO OR LESS than Candidate A = 45632

Total number of candidates who appeared in Session 1: 45632

No. of candidates who secured a raw score EQUAL TO OR LESS than Candidate B = 45067

Total number of candidates who appeared in Session 1: 45067

So, you see, when expressed in Percentile, both the candidates have secured the same scores.

Let us assume the following scenarios as well:

Now, if we consider the raw scores to compile the merit list, then the ranks of Candidates A, B, C, D, E, and F are as under:

Here, you can see that both Candidate E and Candidate F secured the same marks and hence, the same rank. But Candidate E appeared in Session 1 which was easier than Session 2. So, Candidate F should have been the one with a better rank than Candidate E. But that’s not happening because the variation in difficulty level was not considered.

So, let us look at the Percentile Scores of the candidates now:

Now, the merit list considering the Percentile Scores is as under:

Here, Candidate F gets a better rank than Candidate E. So, the discrepancy in the result that would have caused if we had considered the raw scores secured by the candidates who appeared for the exam in different sessions having different difficulty level have been eliminated.

It is in this manner, the authorities calculate the JEE Main percentile scores and determine the ranks. Basically, your Percentile Score indicates the percentage of students who secured less than or equal to the raw score obtained by you.

JEE Main Percentile Vs Rank 2020: How Is The Rank Determined Using Percentile Scores?

So, as you can see, in the above example, we considered just the total Percentile Scores secured by Candidate A and Candidate B to determine their ranks.

For candidates who appeared in both January and September sessions, the best of the two overall (total) NTA Scores will be considered. The JEE Main Merit List will then be compiled accordingly and the All India Ranks will be given.

While compiling the actual JEE Main Merit List, NTA will consider the total, as well as the subject-wise Percentile scores, in the following order:

JEE is one of the most important competitive exams and its preparation requires proper planning and diligence. We have brought JEE Previous Year Papers (2020) to help you in your JEE Preparation. If you are planning to appaer for JEE Main 2021, solving the previous year paper on Embibe will help you understand the difficulty level, syllabus coverage, ideal time for each question, questions involved with multiple concepts, repetitive nature of concepts, etc. Thus, attempt the JEE Previous Year Papers now!

The expected JEE Main Percentile Vs Rank also gives you an idea about whether or not you are likely to get into your dream college with your current NTA Score. You can now plan your next steps accordingly.

If you are appearing for JEE Main 2021, focus on your preparation and finish the whole syllabus on time. Revise them and focus more on the important chapters for JEE Main as well as your weak chapters. Solve as many JEE Main practice questions as possible and take JEE Main mock tests.

Also, with Embibe’s Artificial Intelligence-powered tool RANKUP, you can get personalized guidance for your preparation and improve on your academic weaknesses and test-taking skills. This, in turn, will guarantee your score improvement in JEE Main 2020. So, what are you waiting for?