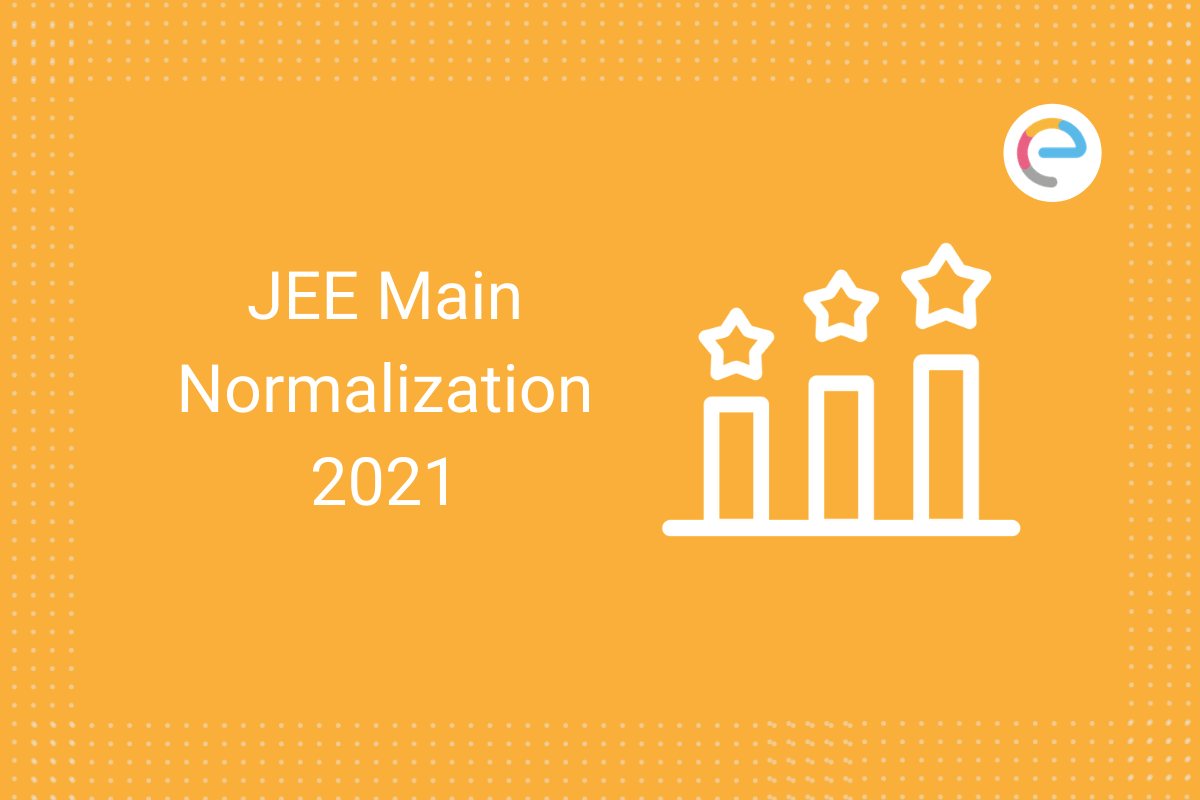 JEE Main Normalization 2021: JEE Main 2021 session 4 has been conducted on August 26, 27, 31, and September 1 & 2, 2021. NTA was conducted the JEE Mains in four sessions this year – February, March, April/July, and May/August. As the exam was being conducted in four sessions, there is variation in the difficulty level of the exam across various dates and slots. Students attempting a tough paper are likely to score less than those who got an easy paper. This can result in discrepancies in the JEE Mains result and merit list/rank list.

In order to solve this problem, National Testing Agency (NTA) will normalize the raw or actual score secured by the candidate into the NTA Score (normalized score), which takes care of the variation in the difficulty level and other factors. The JEE Main Normalization process 2021 will be based on Percentile Score (Percentile Equivalence Method). This article will provide you with all the details about JEE Main 2021 Normalization Procedure and how the marks will be calculated. Read on to find out.

Before getting into the JEE Main 2021 Normalisation process details, let us first understand what Percentile Score means.

Percentile scores, basically, tell you how you have performed relative to all other candidates who appeared for the exam. It is not the same as your percentage score.

This means, in each session, the marks secured by the candidate (say, out of 300 in the case of JEE Main Paper 1) is converted into a scale ranging from 100 to 0. The topper for each session will, thus, secure a percentile score of 100.

Let us now see how JEE Main Percentile is calculated. The Percentile Score for JEE Main will be calculated using the following percentile formula:

Let us elaborate on it with an example.

Consider the following data for a particular session of the exam:

Now, using the above formula,

This means 100 percent of candidates secured less than or equal to 335, and no candidate secured more than 335.

This means out of the 41326 candidates who appeared for this session, 90.124411 percent of candidates secured less than or equal to Candidate B. It also means all other candidates have scored more than Candidate B.

As mentioned in the introduction, the JEE Main Normalization 2021 is based on the percentile score (or NTA score) secured by the candidates. Both subject-wise and total NTA scores are calculated for each candidate.

This reduces the chances of discrepancy in results due to variation in the difficulty level of the papers across slots. How? We will elaborate in the next section.

How Does JEE Main Normalization Eliminate Discrepancies Caused By Variation Of Difficulty Level?

So, let us elaborate on it with an example.

Let’s start with the following assumptions:

Let us also assume that Session 1 was easier than Session 2.

Now, if we consider the raw scores secured by the two candidates, of course, Candidate A would be the overall topper.

But that would be unfair because Session 2 was more difficult than Session 1.

Now, let’s see what happens if we normalize the scores secured by Candidate A and Candidate B using the above formula and express them in Percentile.

No. of candidates who secured a raw score EQUAL TO OR LESS than Candidate A = 45632

Total number of candidates who appeared in Session 1: 45632

No. of candidates who secured a raw score EQUAL TO OR LESS than Candidate B = 45067

Total number of candidates who appeared in Session 1: 45067

So, you see, if expressed in Percentile, both Candidate A and Candidate B have secured the same scores.

Let us assume the following scenarios as well:

Now, if we consider the raw scores to compile the merit list/rank list, then the ranks of Candidates A, B, C, D, E, and F are as under:

Here, both Candidate E (of Session 1) and Candidate F (of Session 2) secured the same score and hence, have been given the same rank. But Session 1 was easier than Session 2. So, Candidate F should have been the one with a better rank than Candidate E. But that’s not happening because the variation in difficulty level was not considered.

So, let us look at the Percentile Scores of the candidates now:

Here, Candidate F gets a better rank than Candidate E. So, the discrepancy that would have arisen if we had considered the raw scores of the candidates who appeared for the exam in different sessions having different difficulty level, have been eliminated.

The NTA follows the same procedure to calculate the JEE Main percentile scores (both total and subject-wise) and determine the ranks.

How Is Merit Determined In JEE Main?

The NTA will release the JEE Main February Result in this manner. For the March, April, and May sessions too, the JEE Main Result will comprise the subject-wise and overall NTA Score (Percentile Score).

For candidates who appeared in more than one session, the best overall (total) NTA Scores will be considered.

After that, NTA will compile the JEE Main Merit List and declare the All India Ranks.

In case, two or more candidates secure the same total NTA score, NTA will consider the following factors (in the same order) to determine their ranks:

If the tie exists even after applying these, candidates will be given the same rank.

Check Out JEE Main Percentile Vs Rank From Here

Check out the JEE Main 2021 Normalisation procedure PDF at the official website- jeemain.nta.nic.in:

The counselling and admission procedure will be based on the final merit list of the candidates.

Now you have all the details on the JEE Mains Normalisation procedure, and you also know how the NTA Score is calculated. With the release of the JEE Main Result 2021, you will get the NTA Normalized Score and your qualifying status for the JEE Advanced.

At Embibe, we also provide personalized guidance for your preparation for JEE Main. Our Artificial Intelligence-powered tool, RANKUP, provides instructions and guidance to improve your academic, behavioural and test-taking skills. This, in turn, helps in guaranteed score improvement.

Que 2: How normalization is done in JEE Mains?
Ans: We have explained the normalization procedure above in this article. Candidates are advised to check the above-mentioned information for the detailed idea of JEE Mains.

We hope this article on JEE Main 2021 Normalization helps you. If you have any questions, feel free to ask in the comment section below. We will get back to you at the earliest.