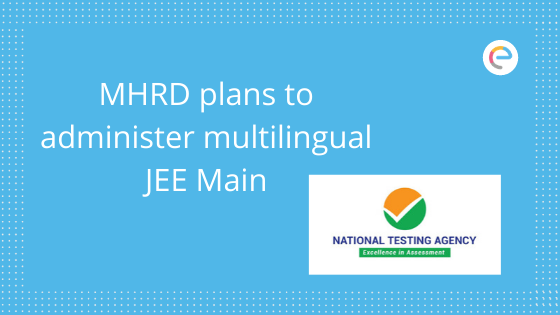 BENGALURU, NOVEMBER 30: The Joint Entrance Examination (JEE) paper will be held multilingually even as the Ministry of Human Resource Development (MHRD) agrees to prefer states with the majority of applicants.

The MHRD Secretary Office shared, “The MHRD will give preference to the regional languages of states with more number of applications in the last five years.”

Further, the MHRD officials added that there can be certain technical limitations in the process including developing software in regional languages and is a time-taking process. “Since JEE Main is held in a computer-based mode, there are some limitations that need to be addressed, first. We are committed to conducting JEE Main in multiple languages and the process will take time,” HRD Secretary, R Subrahmanyam said.

With such a statement, the MHRD tried to convince that the idea of JEE Main in multiple languages is not a sooner concept.

Going by the numbers, MHRD agrees to include Marathi and Telugu in the first lot. Maharashtra witnessed as many as 1.1 lakh of applicants in the April 2019 exam, while the combined numbers of Andhra Pradesh and Telangana, rose to 1.6 lakh.

The MHRD doubts to administer JEE Main in Bengali, though the West Bengal Chief Minister Mamata Bannerjee raised her concerns for the same. MHRD putting forward the application numbers of the state argue that there were just 20000 test takers for the last session exam.

The National Testing Agency (NTA) is conducting JEE Main 2020 in English and Hindi languages between January 6 and 11. However, the candidates appearing at the examination centres located in Gujarat, Daman and Diu, and Dadra and Nagar Haveli, will have the option to choose Gujarati language besides English and Hindi.

Explaining the inclusion of Gujarati language, NTA said the state requested the same and no other states have approached the agency for the translation of questions in their regional languages.

Stay tuned to embibe.com for latest news and updates on JEE Main 2020