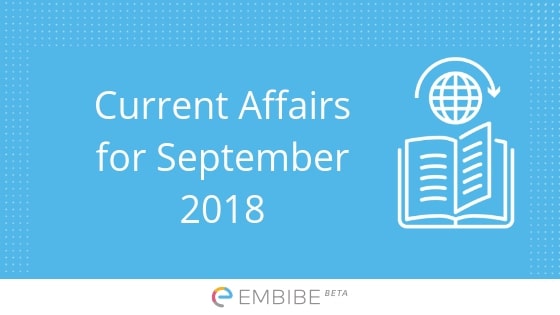 Current Affairs September 2018: The General Awareness section an integral section of most of the competitive exams. After all, this section tests a candidate’s knowledge of Current Affairs and events taking place in the society. General Awareness section has made its way to the most coveted competitive exams like IBPS PO, IBPS Clerk, RRB Group D, SSC, SBI PO etc. Every aspirant should, therefore, brush up their general knowledge to clear the section-wise cutoff marks.

Skipping the General Awareness section is out of the question as this section can be responsible for an increase in your overall marks too. It is advised to start your Current Affairs preparation along with your preparation for other sections. Keeping this section for last minute is a worse idea as last minute preparation will heap multiple pieces of information which will automatically lead to confusion.

Have a look below for Current Affairs September 2018 in order to score well in this section:

The top current affairs for September 2018 are as under:

The northeastern state of India, Sikkim gets a historic development as it gets its first-ever airport. The airport will be inaugurated by Indian PM Narendra Modi on September 24, 2018, at Pakyong.

Vietnam saw the demise of its President Tran Dai Quang on September 21, 2018. The President passed away at the age of 61 in a military hospital in Hanoi owing to prolonged grave sickness.

This year saw a large number of recommendations for the Rajiv Gandhi Khel Ratna award. The nomination board had elites and awardees from Olympics to journalists from the Sports genre and Sports Administrators.

India-Bangladesh alliance received a new turn as Indian PM Modi and Bangladesh PM Sheikh Hasina jointly launched the construction of Indo-Bangla Pipeline Project. The project was launched on September 18, 2018. This project is said to be a strengthening cord of Indo-Bangla ties.

Romania will open a consulate in Chennai this year. This move is considered to present various opportunities for the Romanian magnates.

In a welcoming situation, the Supreme Court of India finally lifts the ban on the sale of Saridon, a popular painkiller. The Court also relieved three other fixed-dose combinations (FDCs) of the ban. All of these medicines can now be sold in the medical shops.

This decision of UIDAI came as a relief for most of the students without an Aadhar Card. UIDAI took this decision after getting aware of various instances where students were refused admission due to the unavailability of Adhar Card.

This initiative by China, the BCIM project is expected to move through Mandalay in Myanmar, Dhaka, and Chittagong in Bangladesh and concluding in Kolkata.

The Supreme Court of India abolished the 158 year old penal provision that stated adultery as a criminal offence. This decision came into enforcement on September 27, 2018. The apex court further said that husband is not the master of wife and even after adultery leading to divorce and being a civil wrong it can definitely cannot be termed as an offence.

The apex court of India in its first one of a kind move allowed video recording and live streaming of proceedings going on inside the courtroom across India. The SC further justified this move to bring accountability and transparency into the judicial system and to serve the public.

Pradhan Mantri Jan Arogya Yojana also known as the National Health Protection Mission or the Ayushman Bharat was launched by the Prime Minister of India on September 23, 2018. This flagship scheme is believed to provide free medical coverage of up to Rs 5 lakhs per family in any government or private hospitals all over India.

As part of the WWF ‘Tx2’ programme that aims at doubling the number of tigers worldwide, Nepal has reached the level to be named the first country to double the population of tigers in the country.

The lack of proper diagnosis of TB cases still remains a major challenge. Acting on the major of TB cases going unnoticed, WHO calls for a quick action to curb TB.

An island country, Maldives got its President-elect Ibrahim Mohamed Solih after a complex election for the seat. Maldives has been in a geo-political struggle between India, China, and the West. As soon as the news of Mohamed Solih being president-elect spread, congratulatory messages started pouring in from major countries including India and the US.

In order to support the achievement of key evolutionary results that have been recognized in consultation with the government body, India along with the UN agencies stood in support of the Sustainable Development Framework.

Customs Duty on 19 items including Jet fuel, ACs and Refrigerators went for a hike in order to curb imports of non-essential goods. The Union Government doubled the import duties on Refrigerators, Washing machines, and ACs less than 10 kgs to 20 percent.

Stay updated with the recent news and apart from that, keep practising Bank Mock Test Series as well. That will help you in understanding the questions asked in the exam.

We hope this article assists you; still, if you have any query regarding Current Affairs September 2018, drop down your comments below and Embibe will get back to you.