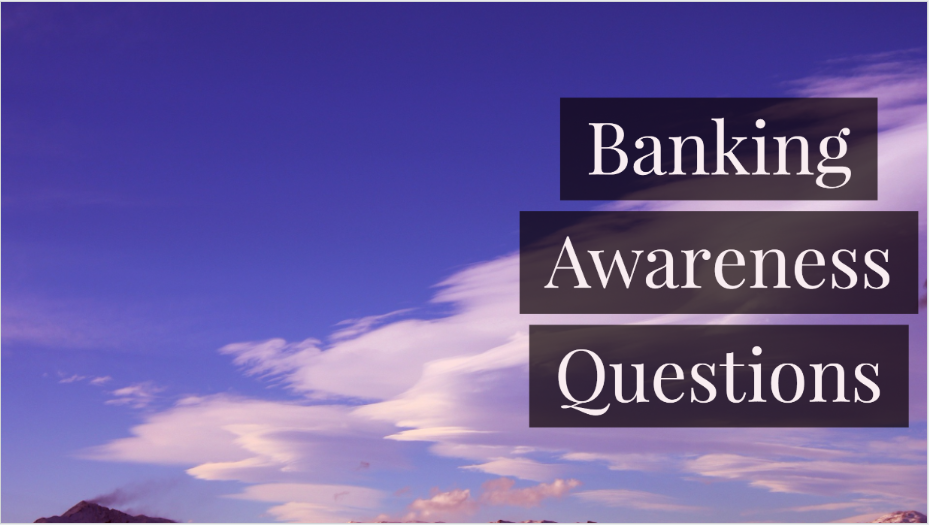 The more you practice, the better you get. So solve these three tests to improve your confidence. while writing tests for various competitive banking exams like RRB, RBI, IBPS PO, Associate Banks of SBI and IBPS clerk Bank exam. Remember, do not cheating! Answer these question before checking the answers.

Slogan of HDFC is _______ ?
We Understand Your World
A premier government of Indian enterprise
Relationship beyond banking
A tradition of trust

2. Slogan of Federal Bank is _________?
For all your needs
One family one bank
Together we can Your
Perfect Banking Partner

4. Slogan of IDBI Bank is _______?
Trusted family bank
Where vision gets built
Banking for All; Aao Sochein Bada
Good people to grow with

6. Slogan of Punjab National Bank is _______?
indias international bank
Smarter Money
The Name you can BANK upon
Protection

7. Slogan of Oriental Bank of Commerce is _______ ?
Banking for all
What’s in your wallet?
You can count on us
Where every individual is committed

8. Slogan of State Bank of India is _______?
Where money lives
The Next Stage
Banker to every Indian
Embracing ingenuity

9. Slogan of Syndicate Bank is _______?
Together we make a great team
Smart way to Bank
Invest with confidence
Your Faithful And Friendly Financial Partner

10. Slogan of Union Bank of India is _______?
Good people to bank with
Making more possible
At the service of your ideas
More human interest

7. Which among the following does the RBI not decide?
SLR
CRR
Bank Rate
Base Rate

8. What does ‘T’ in RTGS stand for?
Time
Transaction
Tax
Transfer

10. Which among the following is at times mentioned as a kind of Direct Debit Facility?
RTGS
ECS
NEFT
None of the Above

14. Which of the following organizations is the Mutual Fund Market regulator?
CIBIL
MCX-SX
SEBI
National Stock Exchange of India

3. ________ is the difference in value between a country’s imports and exports.
Balance Of Trade
Balance of Payment
Balance of power
Credit Balance

4. What does ATM stand for?
Any Time Money
Automated Teller Machine
All Time Money
None of the above

5. _________ is a statement showing the assets and liabilities of a business at a certain date.
Accounts Payable
Account Sheet
Accounts Receivable
Balance Sheet

6. A short-term loan that is used until a person or company secures permanent financing or removes an existing obligation is called as ?
Cash Credit
Term Loan
Bridge Loan
Letter of Credit

8. Money loaned by a bank or other institution which is repayable on demand is called as ?
Call Money
Demand Loan
Cash Credit
Short Term Loan

10. _________ is the means by which a government adjusts its spending levels and tax rates to monitor and influence a nation’s economy.
Economic Policy
Fiscal Policy
Long Term Planning
Monetary Policy

11. Banks which are included in the second schedule of the Reserve Bank of India Act, 1934 are called as ?
Public Sector Banks
Co-Operative Banks
Foreign Banks
Scheduled Banks

12. A system that allows customers of a financial institution to conduct a number of financial transactions through a mobile device such as a mobile phone or tablet is known as _________?
Mobile Banking
eBanking
Internet Banking
None of the Above

16. Banks where a majority stake (above 50%) is held by a government are known as
Nationalised Banks
Government Banks
Public Sector Banks
Commercial Banks